Visit the official website of Air France at www.airfrance.com where you can find out all the latest deals and offers. This is the only authentic website where you can find all the relevant information regarding bookings, cost, and different facilities.

With a slogan of ‘France is in the air’ the company ranks the largest European Airline with 25.5% of total market share as of November 2004. It was also the largest airline in the world in terms of the opening revenue. They provide the best accommodation thus proving to be the best in terms of hospitality. They are also a subsidiary of Air France-KLM.

The Air France airline was formed on 7th October 1983 from a merger of several airlines. The company was granted the management of the entire French air transport network by the French government in 1945. In the following year, Air France appointed their first flight attendants. The first air terminal of the airline company was opened in the same year at Les Invalides in Paris. The airline company merged with Netherland based KLM Royal Dutch Airlines in the year 2003. The year 2017 saw a strategic partnership between Air France-KLM and multi-airlines including Delta Air Lines, China Eastern Airlines and Virgin Atlantic Airways.

Air France is a subsidiary of Air France-KLM group and also a founding member of the Sky team global airline alliance. Headquartered in Roissypole, Charles de Gaulle Airport, and Tremblay-en-France, the company has its hub in Charles de Gaulle Airport and Orly Airport. As of 2013, the airline company has 36 destinations in France and separated worldwide scheduled passenger and cargo to 168 destination in 78 countries. The airline company Air France operates fleets of Airbus and Boeing wide body jets on long-haul routes while using Airbus A320 family aircraft on short-haul routes.

Air France airlines fly to about 36 domestic destinations and 168 international destinations in about 93 countries. These include the cargo services and destinations served by several franchises Air Corsica, City Jet, and HOP! However most of the Air France’s international flights operate from Paris-Charles de Gaulle. The airline company has several hubs, some of which are-

The Air France airlines are famous for their excellent hospitality. They offer a flyer program known as Flying Blue which awards the members some points based on the miles they have travelled along with the class. Passengers can have free memberships for this program which is divided into three statues- Standard, Elite, and Elite Plus. The Elite Status can be attained by travelling a certain number of miles within a calendar year. They also offer a card called Club 2000 to some VIPs, celebrities, and politicians.

Passengers can have one 23kg checked baggage in Economy and two checked baggage of 23kg each in Premium Economy class. Business class allows the travellers two bags of up to 32kg each whereas the most expensive class La Premiere allows three bags of 32kg each.

When it comes to the size limit of checked baggage the airline company does not allows items exceeding 158inches including the pockets, wheels and handles. You baggage item exceeds the weight limit you need pay extra amount at the airport.

The meal that is served depends on the travel class, destination, as well as the time of the day.

Air France airways food: Passengers can purchase meals in the Economy and Premium economy cabins. The “A la Carte” meals offer a wide selection of meals.

The passengers can buy online tickets from the official website of Air France or through any other online portal.

They offer ticket options such as-

If you are looking to make Air France reservations visit our website airlinesmap.com or can book with direct Air France official website https://www.airfrance.com You may call our toll free number 888-220-0490 or direct Air France number +33 (0) 89 27 0265 4. Get more information about Air France Reservations and Flights Tickets to click below.

Visit Air France site for web check-in https://www.airfrance.com and navigate to manage to bookings. You may have the option of online Air France Web check-in and boarding pass if still, you are facing any problem please call +33 (0) 89 27 0265 4.

It's very easy to claim Air France cancellation and Air France refund call direct phone number of +33 (0) 89 27 0265 4 or visit official site https://www.airfrance.com manage bookings. You may have the option to refund or cancellation. 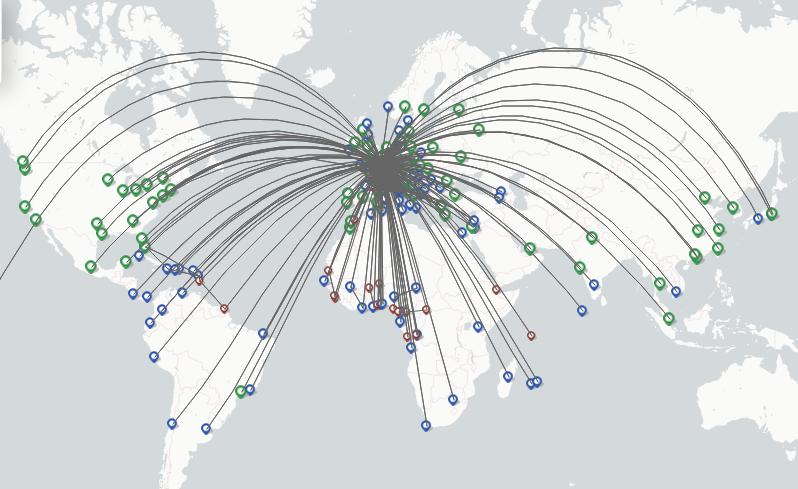 1. What security checks are done on my luggage?

According to the laws imposed by french security, the checks done security measures have multiplied. Random checks may also be implemented on the luggage. Labels will be provided by the security personnel if you don't have any, and you should carry weight based on the maximum weight allowed in flight.

2. What membership cards are offered by Air France?

You can find details about the pass on the official website. https://www.airfrance.com/indexCom_en.html

4. ​What is required to enter the airport terminal and check-in at the counter?

5. ​What is allowed in cabin baggage on Air France?

The cabin baggage that is allowed in Air France differs for the different classes. In

6. Can we carry food and alcohol is allowed in Air France flight?

The airfare of Air France includes snacks and meals for all the destinations so carrying extra food in the flight is not necessary. Air France also serves complimentary alcoholic and non-alcoholic drinks onboard, but alcoholic beverages are only served in the flights whose flying hours is more than ten and a half hours and a buffet is open through the entire flight in which you have to help yourself to serve.

7. How can I pre-book Air France extra baggage and its charges?

8. How can I get discounted coupons for Air France airlines?

There are many portals for booking air tickets online for Air France which generally gives discounts. The official website also gives various discounts if the tickets are booked through the website.

9. Does Air France have WIFI?

In Air France, only the aircrafts Boeing 787 has free wifi and inflight entertainment which helps you in watching movies, web series etc.

10. Does Air France provide food? veg /non-veg. And can I carry my own snack onboard to eat?

The food and snacks in Air France are included in the fare itself, hence, you need not have to carry snacks onboard. Air France provides both vegetarian and non-vegetarian food items.

11. How I can make a reservation with direct Air France airlines?

The official website is the most preferred option for making a reservation directly. However, there are many online portals as well in which the passenger just has to fill the starting point, destination, journey date, no. of passengers and the class in order to book a ticket.

12. How can do date change in Air France airlines flight?

After booking the tickets the date of the journey can easily be altered by contacting the airline Air France directly. The journey date can be altered easily but the same depends upon the availability of the seats, no. of days left for the journey etc. In case there are some additional charges that the passenger has to pay then the same is done online itself.

13. What is the direct phone number of Air France airlines customer care?

14. What onboard services will Air France offer?

Air France serves different kinds of meals in different classes. They have a different menu for the kids. They serve snacks, meals, hot and cold beverages, alcoholic and non-alcoholic beverages, etc which depends upon the duration of the flight hours.

15. If I am denied boarding, am I liable to receive compensation?

Air France constantly works and looks after so that no customer is denied boarding and even a situation arises then necessary arrangements are made so that the passenger doesn't face any difficulty. The services offered are seeking volunteers, compensation is awarded to those passengers who are willing to take the next scheduled flight, accommodation charges are also paid if availed by the passenger, etc.

16. Can I interline my Air France flight with other domestic and/or international airlines?

One can easily interline Air France flight with any other domestic or international airline. There are many airlines which have a contract with Air France namely: Korean Air, Delta Air, China Airlines etc.

17. How to book tickets for Air France airlines?

Booking tickets for Air France is very easy, you can simply log on to their official website and fill in the necessary details. Tickets can also be booked through a travel agent or through many other online portals which offers easy discounts.