Volotea is a low-cost airline of Spain, and it is registered in Barcelona. It has its base located in Spain, Italy, France and Greece. This airline was found in the year 2011 and is carrying on its operations from the last 8 years. You can head towards their official website to know more about them in detail. They have the website registered as www.volotea.com.

It has its headquarters situated at the Asturias Airport, Spain. The operations were commenced in the year 2012 by Volotea. Operating from the last 8 years currently, it has a fleet size of 36 flights providing services on a daily basis carrying a number of passengers who travel to various destinations. Its name was derived from a Spanish verb "revolotear", which means to " fly around". Its operations commenced from the Venice Marco Polo Airport.

It was in the year 2015, that Volotea officially announced that it will replace its 717 fleet in the near future with Airbus A320 aircraft. At the start of its journey, Volotea opened 90 routes in the first year itself. After operating for the next two years 40 of them were closed. In the year 2018, it operated almost 300 routes in summer 220 opened ones and it targets to double the frequency to 500-600 across Europe. In the year 2017, due to some political riot, it had to change its headquarters to Asturias Airport.

Volotea aims to connect small and medium-sized European cities serving non-stop flight services at minimum costs. Quality services are provided at comparatively low rates. They have a mindset to think from a human point of view and provide affordable travel to an individual. Volotea currently owns 13 bases, out of which 3 are recently opened in the year 2019. A large number of flights scheduled by Volotea in the year 2019 is expected to operate by Airbus A319 aircraft. This range of aircraft will allow Volotea to operate longer routes and explore new markets.

Volotea tends to serve an average of 84 destinations in total and has its main focus around the European side of the Mediterranean ocean, along with the Western and Southern Europe. There are seasonal charter flights operated as well by Volotea from London South Airport. It also serves various leisure destinations in Spain, Italy, France etc. Few destinations in Austria, Croatia, Germany, Ireland etc are also served by Volotea.

There are in budget flights offered by Volotea across Europe. They don't follow the crowd as they do not operate to earn huge profits. Instead, they offer good quality services at affordable rates to its passengers and serve the individual by not burning a hole in their pockets. It also aims to operate on all-Airbus fleet over the recent years. The seats are super comfortable since they are almost 5% wider than what is offered in other airlines.

Passengers are allowed to carry two pieces of luggage along with them, but they should be of different dimensions so that they can fit perfectly in their allocated places. The first one should be of not more than 55*40*20 and the second one can be 35*20*20. The checked-in luggage of an individual should not be more than 20 kgs.

While travelling in Volotea's flights you can enjoy a wide range of food and beverages ranging from hot and cold beverages. They also serve a wide range of alcoholic drinks ranging from beer etc. Sandwiches, sweets and a number of snacks are offered to the passengers on board. Alcoholic drinks in the flight are only allowed which are purchased on board.

Easily book your travel tickets for Volotea flights from their official websites. They offer discounts on the flight tickets quite often and this way you can bag a ticket at much less price. You will be provided with a booking confirmation number after successfully booking a seat and with the help of this number you can manage your booking and change options is required.

The Volotea aircraft provides four different classes for its passengers. You can easily choose from the options available while booking a ticket for yourself. The four different kinds are - Economy, Premium Economy, First class. The services provided and the fare charged is different for each class and the passengers can opt for their choice accordingly.

The charges of the First class if the highest from among the seats available and there are extra services provided to the passengers travelling through first class. The economy's fare is the lowest and even it has quality services,but the number of services are less as compared to others.

If you are looking to make Volotea reservations visit our website airlinesmap.com or can book with direct Volotea official website http://www.volotea.com/ You may call our toll free number 888-220-0490 or direct Volotea number +34 93 122 071 7. Get more information about Volotea Reservations and Flights Tickets to click below.

Visit Volotea site for web check-in http://www.volotea.com/ and navigate to manage to bookings. You may have the option of online Volotea Web check-in and boarding pass if still, you are facing any problem please call +34 93 122 071 7.

It's very easy to claim Volotea cancellation and Volotea refund call direct phone number of +34 93 122 071 7 or visit official site http://www.volotea.com/ manage bookings. You may have the option to refund or cancellation. 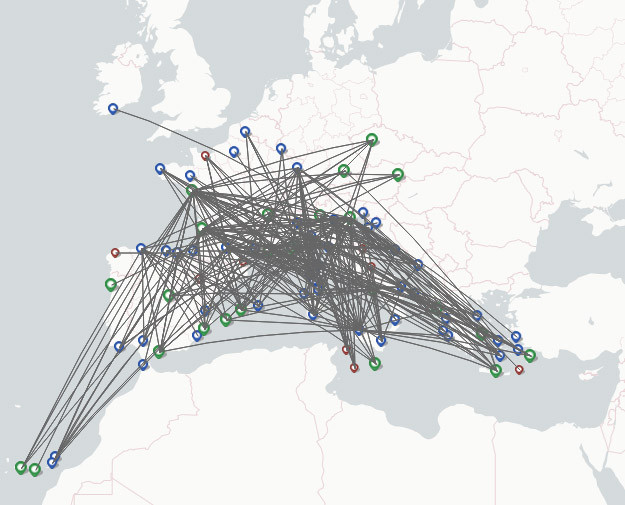