Virgin Australia was found by Richard Branson, a British Businessman who is also the founder of the Virgin Group. The hubs of Virgin Australia are in Auckland, Brisbane, Melbourne and Sydney. Virgin Blue was renamed as Virgin Australia on 4th May 2011 at the same time the airline brought forward it's new aircraft Airbus A330. Premium Economy in Virgin Australia was announced later in the year 2008. The airline targets business and corporate customers. The airline has expanded itself to all the cities of Australia and numerous holiday destinations. As the airline started growing and expanding it started replacing its old Boeing aircraft with the new ones the fuel efficiencies of which are greater.

The fleet of Virgin Australia now consists of both Airbus and Boeing to cover all its sectors. The total fleet size of the airline is about 102 and the company's tagline is This is how we fly which brings about a change in the experience of flying for the passengers. The parent company of Virgin Australia is Virgin Australia Holdings. The flight also provides inflight entertainment for its passengers since December 2006 which was initially only introduced in Boeing 737 aircraft which was later even announced for Airbus A330-200 aircraft.

The frequent flyer program of Virgin Australia is known as Velocity which was announced in the year 2005. The program gained immense popularity in the next 9 years and had a total of 4 million members. Velocity is different from that of the other frequent flyer program as the points earned does not depend upon the distance covered rather the points earned depends upon the fare of the flight tickets. The program is introduced with several levels namely red, silver and gold.

The baggage allowance in Virgin Australia for the Economy Class should not weigh more than 7 kgs and the size of the baggage should be 48 × 34 × 23 CM while the check-in baggage is chargeable. Business Class passengers can bring in two baggage of the same weight and dimensions as mentioned above. If the baggage weighs more than 7 kgs then the same would be considered as check-in baggage and would be on a chargeable basis. Passengers carrying infants can carry a separate bag for the infant for the child's belongings.

The food and beverages offered inflight vary according to the different classes. The Economy Class and in all the domestic flights the passengers are given complimentary snacks and non-alcoholic beverages. Complimentary Beer and Wine are offered for the evening flights between 5 PM and 7 PM. The Business Class passengers enjoy the benefit of a sophisticated menu created by an Australian Chef Luke Mangan which includes all the three meals including the lunch and dinner which are prepared by the crew on board.

The tickets for Virgin Australia can be easily booked online. The passengers can easily book their flight tickets online through the website, where a passenger can also request for any special services required as per his preference.

Visit Virgin Australia site for web check-in https://www.virginaustralia.com/eu/en/_cookiesAcceptance/ and navigate to manage to bookings. You may have the option of online Virgin Australia Web check-in and boarding pass if still, you are facing any problem please call +61 7 3295 3000.

It's very easy to claim Virgin Australia cancellation and Virgin Australia refund call direct phone number of +61 7 3295 3000 or visit official site https://www.virginaustralia.com/eu/en/_cookiesAcceptance/ manage bookings. You may have the option to refund or cancellation. 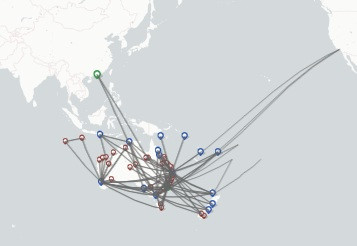