For the best of deals on flight tickets and bookings, you can visit their official website www.luxair.lu which is also the only known authentic website. You will be getting all the necessary information there. The website keeps on adding different discounts and deals.

Luxair which is legally called Luxair S.A. is the Flag carrier airline of Luxembourg having its headquarters and Its hub at the Luxembourg airport. The airline has been operating scheduled services to destinations like Europe, North Africa, the Mediterranean the Middle East and some additional charter and seasonal services to different parts of the world. It is the country's only passenger-carrying Airlines that offers regular and non-chartered service. The airline was founded in 1962.

Descended from the Luxembourg Airlines which was founded in 1948, the airline started its development in 1961 to meet the growing needs for the links between Luxembourg and other European cities. In 1962 the Luxembourg Airlines became Luxair and started its services by launching their maiden flight from Luxembourg- Paris route with a Fokker of F27 friendship. The company got its first Boeing Craft in 1977.  In 2015, the airline decides that it would stop the route to Frankfurt Airport which was previously operated on a codeshare with Lufthansa.

With a fleet size of 19 advanced air crafts and with the company slogan fly in good company, the airline connects nearly 64 destinations in the whole world. The Airlines has its headquarters at Sandweiler, Luxembourg. The airline is growing steadily with about 6 50,000 passengers per year and a well-established zone in Luxembourg and surrounding the greater region. The company has about 2800 employees who are working in a multicultural and dynamic environment and are constantly putting their skills and their know-how at the service of the customers to satisfy the high expectations of everyone and the clients who want the best of all time and every time.

The airline is known to connect 68 destinations in the whole world. It is one of the most efficient Airlines which plays a major role in Luxembourg's economy by regularly connecting air routes from the country to many other European cities and major business centres with direct flights for on codeshares programs with other Airlines.

For more details on the destinations and hubs, you can always visit the official website which has been mentioned above or you can search through Google.

The airlines are providing many essential services which are required in the air transport industry.

Like all the other Airlines, the Luxair has a few Baggage rules which all the passengers will have to follow regardless of their class of tickets.

For the extra luggage that the passenger carries, they will have to pay an extra amount before boarding.

The airline provides complimentary food and beverage to all the passengers but it varies is based on the type of seating.

You can buy the tickets from the official website that has been mentioned above.

If you are looking to make Luxair reservations visit our website airlinesmap.com or can book with direct Luxair official website http://www.luxair.lu/ You may call our toll free number 888-220-0490 or direct Luxair number +352 24 56 1. Get more information about Luxair Reservations and Flights Tickets to click below.

Visit Luxair site for web check-in http://www.luxair.lu/ and navigate to manage to bookings. You may have the option of online Luxair Web check-in and boarding pass if still, you are facing any problem please call +352 24 56 1.

It's very easy to claim Luxair cancellation and Luxair refund call direct phone number of +352 24 56 1 or visit official site http://www.luxair.lu/ manage bookings. You may have the option to refund or cancellation. 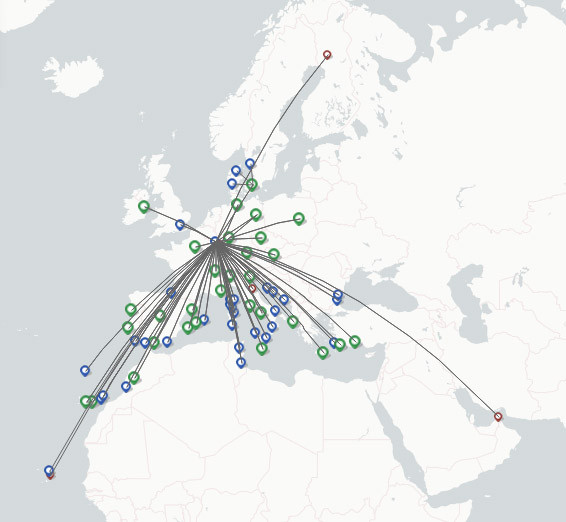