Are you looking for a German airline that you can rely on? Lufthansa is one of the most renowned airlines of all time. So I urge you to choose Lufthansa over any other airline. Visit www.lufthansa.com for further information about this airline.

Lufthansa, which is originally known as Deutsche Lufthansa AG is not only the largest German airline but also one of the most renowned airports of all time. Lufthansa, when combined with all of its subsidiaries, is also the largest airline in Europe if measured by the numbers of the passengers carried. The name Lufthansa is derived from two German words – Luft meaning air and Hansa for the Hanseatic League. Lufthansa is also one of the five founding members who established Star Alliance. Star Alliance is the world’s largest airline alliance and it was established in 1997.

Deutsche Lufthansa AG owns various aviation companies such as LSG Sky Chef and Lufthansa Technik. It also owns various secondary airlines such as Swiss International Air Lines, Brussels Airlines, Austrian Airlines, and Eurowings which includes Germanwings. Lufthansa in total has more than 700 aircraft, which makes it one of the largest airline fleet in the world.

Lufthansa was first established on the 6th of January, 1953. But its history can be traced back to 1926 when Deutsche Luft Hansa AF was established in Berlin. Lufthansa was allowed to start its first domestic flight services from the 1st of April 1955. Its internationals flight services started from the 15th of May 1955 to London, Paris, and Madrid. This allowance was followed by Super Constellation flights from the 1st of June 1955 to New York City. This way, Lufthansa started growing its network slowly and efficiently. Today, it has one of the largest networks of flight distributions across the world.

Lufthansa including Lufthansa regional provides its flight services all over the globe. It covers a total of 18 domestic destinations and 193 international destinations in 81 countries in total. It tries to cover various destinations among Asia, Africa, the Americas, and Europe. It provides its services to places such as Tirana in Albania, Buenos Aires in Argentina, Santiago in Chile, Delhi, Hyderabad and Kolkata in India, etc. It also shares various codeshare agreements with tons of airlines such as Air Astana, Air Canada, Air China, Air India, Cathay Pacific, etc.

Lufthansa provides its passengers with a bunch of special features. It has internet on-board which is the most wanted feature at this point. Every passenger wants an airplane with on-board Wi-Fi so that they can continue with their lives even while traveling. This feature makes them even more desirable. They have lounges in every domestic and international airport to make your waiting period much nicer and enjoyable. They have bus services which allow them to get their passengers to the check-in points on time. They also provide various in-flight entertainment to keep you engaged throughout your flight duration.

Lufthansa provides its passengers with a very desirable baggage allowance

Lufthansa has a total of 4 classes that give you the best quality treatment. These classes are:

If you are looking to make Lufthansa reservations visit our website airlinesmap.com or can book with direct Lufthansa official website http://lufthansa.com/ You may call our toll free number 888-220-0490 or direct Lufthansa number +49 69 86 799 799. Get more information about Lufthansa Reservations and Flights Tickets to click below.

Visit Lufthansa site for web check-in http://lufthansa.com/ and navigate to manage to bookings. You may have the option of online Lufthansa Web check-in and boarding pass if still, you are facing any problem please call +49 69 86 799 799.

It's very easy to claim Lufthansa cancellation and Lufthansa refund call direct phone number of +49 69 86 799 799 or visit official site http://lufthansa.com/ manage bookings. You may have the option to refund or cancellation. 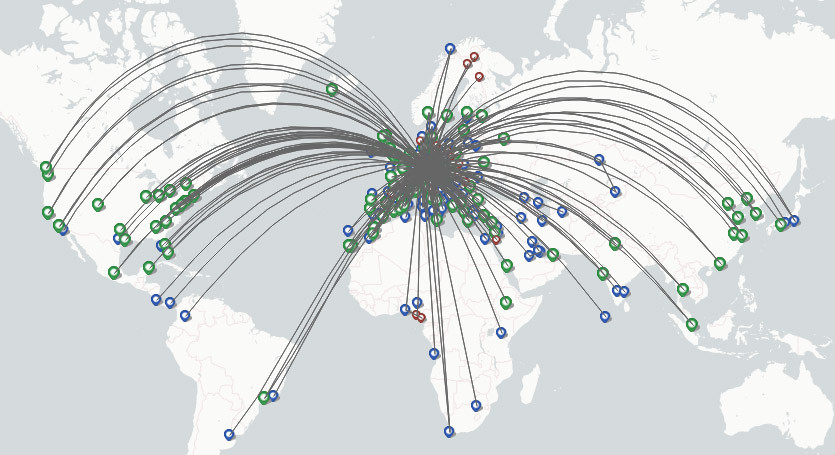