Hawaiian Airlines is recognised as the flag carrier and the largest airline as well in the Hawaii state of U.S. The tenth-largest airline of U.S has its headquarters in Honolulu, Hawaii. Founded in the year 1929, this airline is operating for 90 long years. The fleet size is believed to be 57. It has a very famous slogan, which indicates the workings of the company. It says "Hawaii Flies with Us." It has its official website registered as www.hawaiianairlines.com

Operating as the oldest U.S carrier, it has a record that is clean in the sense that there has not been a single accident this carrier has met, neither it has gone through a hull loss. Hawaiian Airlines are also considered as the top on-time carrier. It also has a history of very few cancellations, a low number of baggage issues and other similar ones. The mentioned traits clearly depict that this can be considered as one of the best airlines which has a clean record of carrying its passengers with utter care.

It began its operations as Inter-Island airways through the Bellanca CH-300. Bellanca was then restored to normal condition by Hawaiian in the year 2009. In the year 1941, on October 1, the name of the company was changed to Hawaiian airlines after it stopped the usage of Sikorsky S-38 and S-43 flying boats. Jet services were started by Hawaiian airlines in 1966 after it has made a purchase of Douglas DC-9-10 aircraft, this aircraft is believed to shorten the journey time to almost half of what is normally taken by other crafts.

On May 1, 2017, a brand new logo was revealed by the company, which also revealed the livery for its aircraft. When it flew its first flight after its incorporation, a number of people gathered to witness this wonderful scene. The first departure was made by Sikorsky S-38 that had a headcount of 28 passengers. They are currently operating in the 90th year and have been excelling in its services since then.

One of the major specialities of this airline is that never in its history it has met a fatal accident, causing the lives of its passengers. It is proud to announce this and is continuing to provide great hospitality services for 90 years and counting. It has also got entertainment services onboard some being available on rent while some are free to be used.

It allows one handbag free that can be carried by the passenger in the flight. Whereas, the luggage should not exceed the weight of 23 kgs, no matter what class he is travelling. It should also be within the linear dimensions of 157 cms. You can also pre-book for extra luggage starting from 24 hours before the flight. Extra baggage apart from the mentioned would cost you.

It serves Hawaii passengers with complimentary hot and tasty meals during mealtime to all the guests present onboard. The passengers also have a wide range of drinks available to choose from which includes juice, soda, tea and coffee etc. Non-alcoholic ones are complementary whereas alcoholic needs to be purchased.

Looking for flights to fly to Hawaii, you can look for booking tickets at either their official website that is already mentioned in the article or can also search through the internet. Cheap flight tickets are also available at other sites apart from the original website. A number of offers are available on the website itself so that it can be easy for its passengers to travel in Hawaiian Airlines.

Like most other airlines, Hawaiian airlines also offer three major classes through which passengers can travel destinations. It also makes sure that the flight is comfortable and the passengers don't have to go through any kind of discomfort which may cause them to say bad things about its flights. The available classes are coach, business or first class. They also have different fare bars available for different classes. If you want to compare the rates of different classes you can do so while booking tickets on Hawaiian Airlines website. 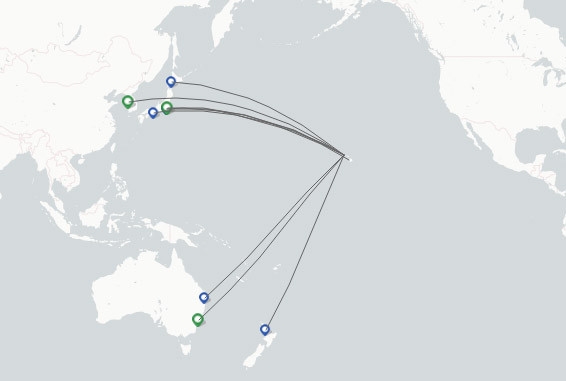