Copa airlines derive its origins from the name ‘Compania Panamena De Aviacion’ originated from Panama. Copa airlines are the owner of the Colombian airlines as well. It started functioning back in the 1947 as the domestic airlines of the Panama City, Panama. Tagged as one of the most affordable, safe and luxurious airlines of the century, Copa airlines never had to look back after the 1940s.

Copa airlines happens to be one of the firsts of its kind to have taken to the customer value more. The Copa airlines bookings started with its easy strategies, online and offline in the early phases of digitization. Also, they launched a mobile friendly website in the year 2011 that made everything very easy for its passengers to track, book, view everything of the flight right on their phones.

Copa airlines are one of the firsts to have changed its status from the domestic airlines in the vicinity of Panama to international airlines. It has a fleet of over 100 aircrafts domestic and international. The company has managed to go all international with the help of 60 Boeing 737-700. Copa airlines overview just tells how efficiently they have been running across the decades. The Boeing airlines that Copa run are all beyond safe for the passengers travelling long routes. Copa airlines have 360 daily runs. That’s a huge number considering the different destinations they have chosen. Covering about 300 different destinations across the globe, Copa Airlines have carved their own name out. Their demand has been high ever since 1947 they launched their line of aircrafts.

As the firsts, it was inaugurated in the year 1944 as airlines. The name, tag and everything took form in the year 1944 but the first operations began in the year 1947. 15th August 1947 saw the first flight take off from the airport of Panama City. The years up until 1990s were very smooth for the airlines as they were one of their kinds with service, diligence and just everything. But it was in the later years of the 1990s that the Copa Airlines saw competition in the Air Panama International. But Copa managed to withstand every type of competition with grace.

Their policies of putting the customer ahead of their own profit is what made them survive through the tougher parts of their journey. In the year 1980, Copa discontinued their domestic line of aircrafts and took to Boeing for their international flights. It was then that they started going international by abandoning the domestic airlines tag.

Copa airlines destinations are about 80 across 32 countries in just America and Caribbean. It is very simple in the current era of digitization to just hop onto the website to view the destinations and hubs of the Copa airlines. All you have to do is up on the search bar of the official website www.copaair.com and search whether the destination you are looking for is there or not.

They have varied flight records for each type of destination that you can simply search out in the website details.

Tagged as one of the safest airlines ever run, Copa airlines have a clean record of the safety issues. The customers, new and existing, agree on the terms and conditions they have on the safety concerns. Almost every airline takes good care of their flights when it comes to safety, but the Copa airlines specialty lies in the ways they have designed it keeping in mind the customers. Their past record regarding the safety has been very clean slate.

The good news is Copa airlines offers variety of food and beverage line for the customers. All you have to do is go through their menu and order for yourself on board. You can even ask for customizations. Copa airlines offer complimentary meals with the flight number, depending on the time and the destination. You are allowed to take your own food onboard.

Yes, Copa airlines have the section to offer you with special meals. You have to pitch them in with the special meal needed 24 hours ahead of your flight at the “Manage your booking” section at the www.copa.com site. They have different provisions for kids, people who are all vegans, vegetarian and every other type.

You have a vast variety of food and beverages with the Copa airlines. They have a wide variety of almost type of soft / hot drinks ever. You can order them at the type of the flight or even ask for the special provisions ahead of the flight.

You are allowed to take the first bag of 23 kgs (50 lbs) only. The bags thereafter would be having an additional baggage fee of over USD 40. The baggage criterion will depend on the class you are boarding on, economy or business class. Also, you can visit https://www.copaair.com/en/web/gs/baggage-policy for more information on the baggage policies of the Copa airlines.

If you are choosing to go completely online with the booking, you can simply visit the official website. Search for the destination you are intending on visiting and the departure date and time. The Copa airlines have the round trip offers too so you can simply check them out. The round trips will give enough space for you to save money. The book a flight option will give you a clear picture on how and when you are booking the ticket. After all the information has been entered correctly, all you have to do is confirm the seat.

There are two classes- business class and economy class. The fares of the flights will directly depend on the class as everything follows- right from baggage to food. The list is here:

Visit Copa Airlines site for web check-in https://www.copaair.com/es/web/gs/home and navigate to manage to bookings. You may have the option of online Copa Airlines Web check-in and boarding pass if still, you are facing any problem please call +507 217 2672.

It's very easy to claim Copa Airlines cancellation and Copa Airlines refund call direct phone number of +507 217 2672 or visit official site https://www.copaair.com/es/web/gs/home manage bookings. You may have the option to refund or cancellation. 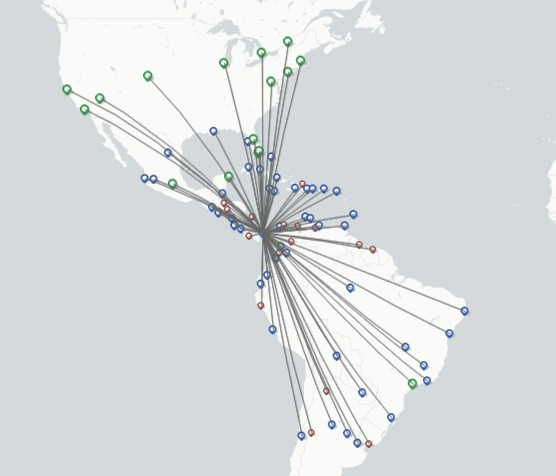