This is one of the best airlines in the world that gets you great deals. You can check out the latest deal at the official website https://flyasiana.com. You will be able to book your travel through the site and you can get all the information and the timetable on this site.

This is a member of Star alliance and it operates through various passenger routes( 14 domestic and 90 international). Also, there are 27 cargo routes across Asia, Europe, North America, and Oceania. The company has staff strength of total 10183 out of which most of them are from Seoul. This is a largest shareholder in Air Busan, and this is a low-cost joint venture with the Busan Metropolitan City. The airlines also have 100% share of Air Seoul.

Korean Air became a private airline in 1969, and it had its monopoly on the south Korean airlines industry till the Asiana started in the year 1988. This was founded by the Kumho Asiana Group and its previous name was Seoul Air International. Till 2007 these airlines were owned by private investors, Kumho Industrial, Kumho Petrochemical, Korea Development Bank, foreign investors and some others too.

This airline has rapidly expanded from its establishment in the year 1988, and not it has become a mid-sized global carried and it currently ahs total 85 aircrafts. In 1998. It operated an aircraft on behalf of the president of the South Korea for the very first time. In 2003 it became a full star alliance member and it has expanded its global brand and worldwide network too. Today it offers international services to 71 cities in 23 countries and that covers total 91 routes. It also provides domestic services to 12 cities across 14 routes.

This is an airline that serves to places on four continents with an Asian network that covers some of the important cities, in Southeast Adia, Central Asia, Japan and People's Republic of China. This airline gives it services to many of the gateway cities in Europe as well as North America while having a limited coverage of Oceania. It has only one cargo subsidiary that is known as Asiana Cargo with a wide network that goes across the United states and Europe. It has also decided to launch its second subsidiary known as Air Seoul and it is based in the Incheon International Airport.

In the year 2006, it has made its corporate identity modern and it has unified with other divisions of the parent company, the Kumho Asiana Group. It has different classes like first class, business class, travel class and there are colors given to each class like travel class yellow, first class and travel class blue and red. New uniforms are given for the entire crew in this year only.

There will be good quality food that will be served on the seat and even there will be hot and cold beverages to compliment your meal.

Special meals will be provided to those who do not eat the regular food. These meals must be prebooked. You can book them at the time of the booking of your flight booking.

Visit Asiana Airlines site for web check-in http://flyasiana.com/ and navigate to manage to bookings. You may have the option of online Asiana Airlines Web check-in and boarding pass if still, you are facing any problem please call +82 2 2669 1166. 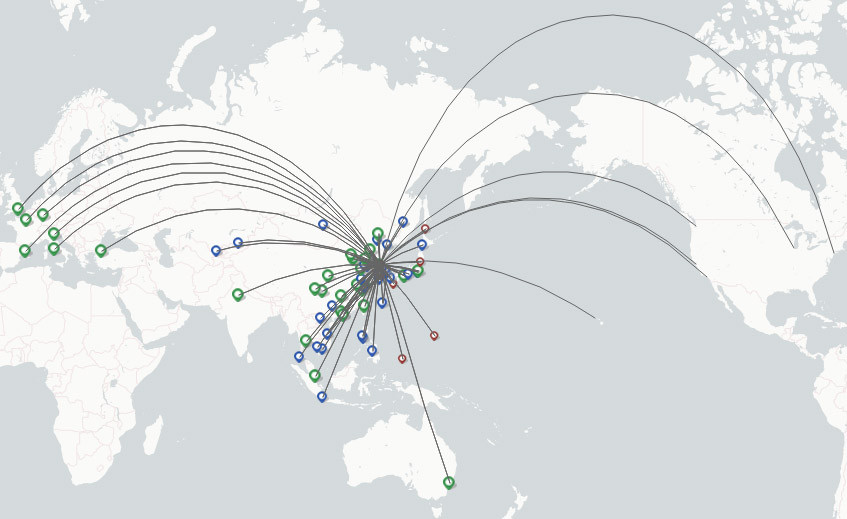 1. Can I go for online check in Asiana Airlines?

Yes. The Asiana Airlines provide this facility and you can add the seat without even logging in. You must enter the reservation informing and enable the pop ups.

2. What are the rules related with the seat allotment Asiana Airlines?

The seat assignments before 48 hours is limited for the group booking of 10 or more people and the passengers  travelling with small kids.

Yes. The name and some other details on the ticket need to be correct and same as the ones on the photo identity cards. If there is a difference, then the passengers will not be allowed to take the flight. The passengers can make a request to the airlines authorities for the same and then the edits can be done. This will be done in advance and no edits can be done at the eleventh hour.

4. What is required to enter the airport terminal and check-in at the counter Asiana Airlines?

At the airport terminal the authorities will check the necessary documents like ticket, passport and the identity cards. At the check in counter the luggage will be checked, and the tags will be given. Then the passengers will be given boarding pass without which the boarding cannot be done.

5. What is allowed in cabin baggage Asiana Airlines?

6. Can we carry food and alcohol is allowed in Asiana Airlines?

Yes. The passengers  can get their own food provided it is not messy. Water and some fluids will not be allowed to get. Alcohol will be served but it will be for limited Asiana Airlines flights only.

7. How can I pre book extra baggage and its charges Asiana Airlines?

If you have extra baggage  that crosses the limits, then you need to pre book that online. If not online then you can also book that as you enter the airport terminal.

8. How can I get discounted coupons Asiana Airlines?

There are some discounted coupons those are available for the frequent fliers. There may be some seasonal discounts too. You can  get the updated information on the website of the airlines. The coupons are valid for a certain period only.

9. Does Asiana Airlines have WIFI?

Yes. This facility is given to the passengers on limited Asiana Airlines flights only. The passengers will be given password and their mobiles must be on flight mode at that time.

10. Does Asiana Airlines provide food? veg /non veg. And can I carry my own snack onboard to eat?

Yes. There is a huge and varied menu of different cousins and one can enjoy best food. If there is  a need for any special snacks, then that must be informed to the crew well in advance. The passengers can also carry their own food while on board only liquids are not allowed to carry.

11. How I can make reservation with direct Asiana Airlines?

The airlines have its own website from where you can make the direct reservations. There will be all updated details about the availability etc. and the passengers can direct book their flight tickets.

12. How can do date change in Asiana Airlines flight?

If there is a need to change the date, then the passengers  are required to talk to the customer care of the airlines. The customer care will do the necessary change only if the tickets are available at that time.

13. What is direct phone number of Asiana Airlines customer care?

The passengers can call on the direct contact number of the airlines  for any queries regarding the airlines, boking, flights etc.+82 2 2669 1166.

14. What onboard services will Asiana Airlines offer?

The Asiana Airlines will offer many onboard facilities like food, beverages, Wi-Fi, television and many more.

15. Will Asiana Airlines have air conditioned buses to take people to the aircraft?

Yes. There will be spacious and air conditioned buses for the passengers. These buses are comfortable as well as relaxing. There will be more space in the bus.

16. Can I interline my Asiana flight with other domestic and/or international airlines?

Yes, if your journey is a long  and the direct flights are not available then you will be able to interlink your flight with some other flights of some other airlines. This facility is given for convenience of the passengers.

17. How to book tickets for Asiana Airlines?

The passengers need to check the viability and schedule of the airlines and then they can book the tickets. They need to enter the right details to get a ticket. The  passengers are required to take a print out  at the airport.