Tata SIA Airlines Limited, also known as Vistara which is a full-service Indian airline. Vistara is a domestic Indian airline which has its hub in Indira Gandhi International Airport, Gurgaon, Delhi. Vistara is an airline which is a joint venture between Tata Sons and Singapore Airlines. Vistara has its official website registered as www.airvistara.com which consists of all the major information about the airline.

Vistara was founded in the year 2013 and is just about six years old. The first sector covered by Vistara was between Delhi and Mumbai. The fleet size that Vistara has got is 28 including Airbus A320 and Boeing 737-800NG aircraft with which it covers a total no. of 25 destinations. Vistara is headquartered in Gurgaon. Vistara has come up with a frequent flyer membership program which is known as Club Vistara.

Vistara has been derived from a Sanskrit word which stands for 'limitless expanse' which was announced publicly on 11th August 2014. It started its operations from 9th January 2015. Vistara is the first domestic airline which started operating from the new terminal of Chhatrapati Shivaji International Airport, Mumbai. Vistara had carried over half a million passengers with just seven months of existence which was declared on 20th August 2015 and it has also achieved on-time performance records from the first month of its operation. Vistara had taken about 2% of the total market share by February 2016. Vistara's first International destination is Singapore which was announced on 11th July 2019 and the first sector covered was Delhi-Singapore-Delhi on 6th August 2019 and the second was Mumbai-Singapore-Mumbai which took place on 7th August 2019.

The set of crews that Vistara has to thrive to provide the best in-flight services. The company's slogan is 'Fly the new Feeling'. Vistara brings a breath of fresh air at a height of about 34000 ft above the ground level. Vistara uses its employees in all the market strategies which resemble the employees as the brand ambassador of the company which helps them to work together as a team and make sure that the passengers aboard do not leave the aircraft disappointed.

Vistara is one of the largest airlines which carries a large no. passengers daily. It also provides special discounts for students and senior citizens. Vistara is the only airline which has got a premium economy class. Vistara is the second full-time service airline after Air India. The seats recline more than that of the other airlines not only this in the economy class the leg space is 20 % more than that of its competitors. Vistara also gives numerous discounts to its frequent flyers in order to build long-lasting relationships.

Vistara is a full-time service airline which means that the charges of the food and beverages that are provided onboard are included in the fare itself. There is a wide variety of food & beverages which are healthy and has a number of cuisines from which the passenger can easily select as per their preference, while the Business Class will altogether have a different dining experience. The passengers get to choose between vegetarian and non-vegetarian options. Also, they have a special menu for kids and infants.

Vistara offers tickets online at a reasonable price and also provides various other services which can be booked through the website. A passenger can now place a request for wheelchair assistance, baby cot, preferences for food if any, for extra baggage allowance beforehand via the website. Placing requests online will save time for the passenger at the airport and will be much easier to process.

If you are looking to make Vistara reservations visit our website airlinesmap.com or can book with direct Vistara official website http://www.airvistara.com/ You may call our toll free number 888-220-0490 or direct Vistara number +91 928 922 8888. Get more information about Vistara Reservations and Flights Tickets to click below.

Visit Vistara site for web check-in http://www.airvistara.com/ and navigate to manage to bookings. You may have the option of online Vistara Web check-in and boarding pass if still, you are facing any problem please call +91 928 922 8888.

It's very easy to claim Vistara cancellation and Vistara refund call direct phone number of +91 928 922 8888 or visit official site http://www.airvistara.com/ manage bookings. You may have the option to refund or cancellation. 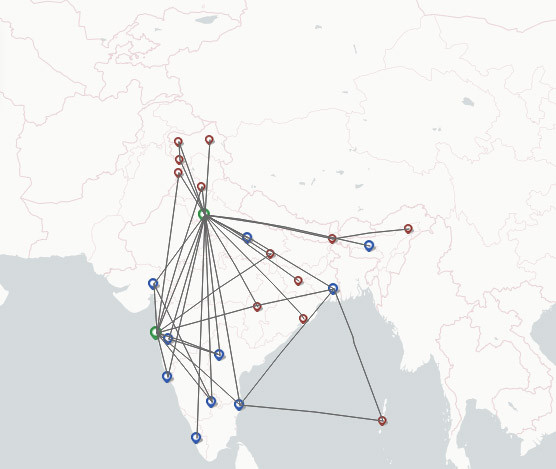