Jazeera Airways is from Kuwait, the airlines are known for its International routes and best in class services. To know more about the airlines please visit www.jazeeraairways.com. The website is not available in English completely

Jazeera Airways K.S.C is a Kuwaiti Airlines, it flies both domestic and international. The headquarters of Jazeera Airlines is Kuwait International Airport located in Al Farwaniyah Governorate, Kuwait. The is Kuwait's second National Airlines, aimed at popularizing the concept of low-cost flying/travelling in the Middle East. The vision of the airlines is “ We aim to be the seamless connection between our customers and their sources of inspiration”.

The Airlines was founded in the year 2004 when the Kuwait Government sanctioned a petition to non-government Airline Company. This ended the era of dependency on Kuwait Airways, and under Emiree Decree #89 Jazeera became the first Airlines Corporation to enter Liberated Market. The airlines provide medical and travel insurance for its passengers.

The company holding of 26% is owned by two major companies Boodai Group namely Boodai Projects is 17% and 9% by Wings Finance. Jasem M.al-Mousa Trading Company holds between 6-7% of the Airlines Corporation. The 17% of the company is also held by two real estate agent and the rest is held in shares by the public.  The Airlines, however, raised its capital of $35million through IPO ( Initial Public Offering). The company was owned by a former Ministry of Public Works until Kuwait's invasion by Iran came to an end. The airlines have a fleet of 20 aircraft. Airlines serve over 1.2 million passengers. The airlines have partnership much wide ranges of hotels and car rental companies. Most of the online reviews of the airlines are negative.

Kuwait Directorate General of Civil's Aviation stated that Jazeera Airways has the largest Air-Traffic with 1834 take-offs and landings. The airlines have a loyalty program called Jazeerati, meaning, " My Jazeera " in Arabic. The Airlines has lounge facilities such as Free Wifi for business, personal, Complimentary hot and cold dishes, snacks and beverages menu, Charging ports, Live Streaming Television, Live Aircraft information, Magazines, Newspaper, Smoking room and seating facility. Besides this, the airline's website provides various holiday packages at the best prices. The airline also has a Jazeera App available for both Android and Apple.

Economy Class: 30kgs is the maximum limit ( 40kgs in case of special flight allowances) and the maximum number of 2 pieces. Single baggage weighing more than 32kgs is not allowed.

Business Class: 50 kgs is the maximum limit and 60kgs in case of special flight allowances.

Economy Class: One piece of language with the maximum limit of 7kgs

Business Class: Two pieces of luggage with a combined weight limit of 15 kgs.

Infants are not allowed any special baggage allowances. No mention of checking strokers and no wheelchairs checking in facilities either.

Airlines has 24 hours before travel, in-flight meal order. The passenger can also modify and cancel the meal 24hours before the flight take off. The menu of Pre-order meal includes Salads, Wraps, Sandwiches, Falafel, Potato Bhaji, Chicken Masala, Chicken Shawarma and they suggest the passenger for economy class.

The Business Class have a different menu and a wide variety of food and food products to choose from.

There are two Classes of flying on GOL Airlines:

Visit Jazeera Airways site for web check-in http://www.jazeeraairways.com/ and navigate to manage to bookings. You may have the option of online Jazeera Airways Web check-in and boarding pass if still, you are facing any problem please call +965 2228 2040. 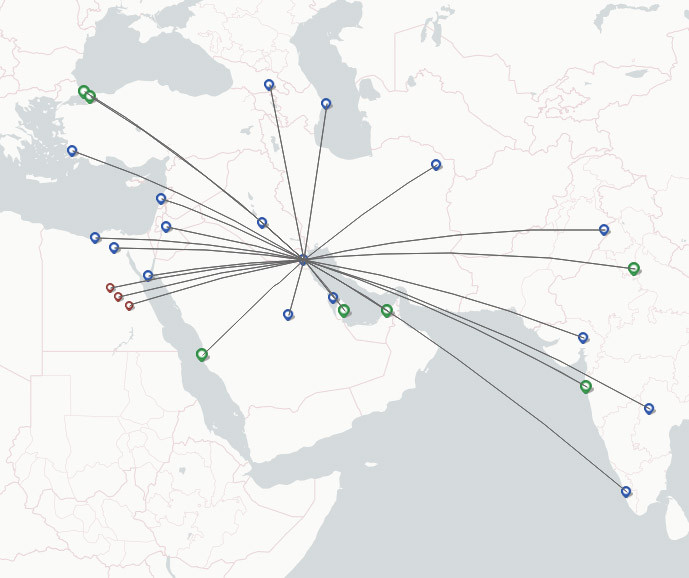