A Hong Kong-based airline that has its headquarters based at the Tung Chung district and has its main hub located at Hong Kong International Airport. Recognised as a member of the

HNA group, it was established in the year 2006. It has a fleet size of 38 aircraft. Being Hong

Kong-based airline it has the hub's name itself in its tagline. The tagline is "Where Hong Kong begins". Get more details about this airline on its official website that is www.hongkongairlines.com​.

The carrier flies to more than 30 cities carrying passengers day and night. It has a fleet size of 38 aircraft that are being used to do the non-stop job of travelling. In the year 2019, the company underwent a financial pressure while attempting to expand its operations due to which the count of passenger carrying fleet got reduced to 28 aircraft.

The chairman of China rich holdings introduced CR airways in the year 2001. Later on 22nd

September 2006, CR Airways decided to officially change its name to Hong Kong Airlines Ltd. and also held a launch ceremony for this occasion. It also launched a new logo of the bauhinia flower. In June 2017, this airline was ranked the second best regional airline by Skytrax and the 24th best internationally. It attempted an expansion which did not go out as planned as a result of which it had to cut its fleet from 38 to 28, due to which its services to some new international routes got reduced.

After its establishment in the year 2006, it has been serving passengers for 13 years, it is recognised as a full-service airline which has its base in Hong Kong. The airlines make it a point to deliver great quality services may it be on the ground operations or onboard services. It operates on an all-Airbus fleet. Initially, it started its journey as a domestic airline and gradually turned itself into a global carrier through great dedication in the Industry.

It has its main hub at the Hong Kong International Airport, it operates its fleet to almost 30 destinations all over. Among them, more than 20 cities are present in China, Indonesia, Taiwan, Maldives, Thailand, etc. They also codeshare with a number of other airlines some of them being Air India, Air Mauritius, Asiana Airlines, Bangkok Airways etc.

It operates both cargo and charter flights all over. Serving a total of 30 destinations, they have comfortable passenger flight. In the year 2015, it was selected as the Official carrier of Hong Kong Paralympic Committee. The airline service provider has got a number of student sponsorships and aviation education programmers.

The standard weight of luggage is followed by this airline. They have separate weight limits for tickets of different classes. The economy class tickets allow an average weight of 23 kgs to be carried. Whereas, in the business class if allows a passenger to carry 32 kgs of weight. A handbag can be carried along in the aircraft.

Special cuisines are being prepared by the airlines so that it can give overwhelming experience to its guests and they have a great inflight experience. The meals prepared are being monitored properly to keep up its quality and provide premium quality and satisfy them. The airlines provide complimentary food and beverages vary by flight. They have their own in-flight catering services that are being offered. In the case of domestic flights, they provide local dishes to give a homely feeling to its passengers.

Looking to travel either too or from Hong Kong? You can opt to take this airline's services since it is one of the best. Head towards their official website to make the booking according to your choice of date and time. Booking for both charter flights as well as for cargo can be done from their website. The airline also offers discount coupons at times in order to provide cheap air services to its passengers.

The airbus has two classes to provide travel services to its guests. They can avail any one and travel comfortably between different places. 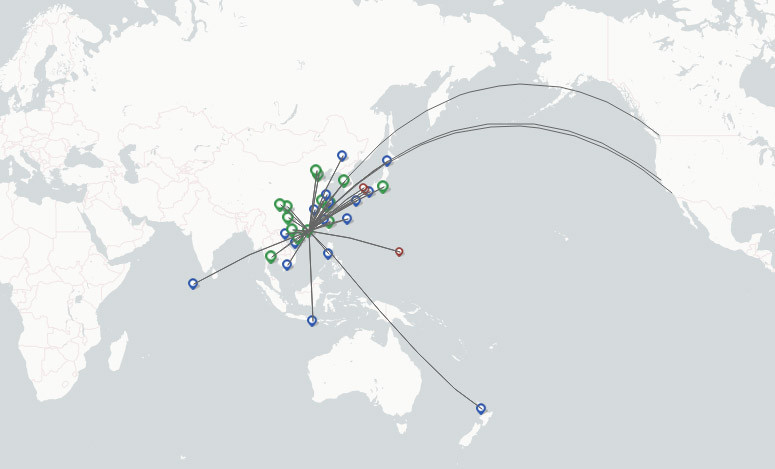