Georgia is a country located between Europe and Asia and became an independent country in 1991 after the collapse of the Soviet Union. Georgian Airways is a flag carrier of Georgia and was established in 1993. The airline is the country’s national airline and it has a great website called www.georgian-airways.com. There is information about various daily flights both domestic and international flights that this airline operates on this website and this carrier offer good prices for flying in the Eurasian region.

Georgian Airways is an international and domestic airline and the main airline in Georgia. Their slogan is simply “Fly With Us” and has grown as an airline since it was established in the 1990s. Today it is a world-class airline with its headquarters in Tbilisi in Georgia which is the capital city of Georgia. The main base of this airline is Tbilisi International Airport which is the main international airport in the country.

Georgian Airways was first established as Airzena in 1993. This was a chartered flight operator that is now rebranded as Georgian Airways. The company became Georgian Airways in 2004 and has codeshare agreements with many international airlines. The fleet has 9 airplanes and the fleet was modernized in 2000 to make it a 21st century airline.

Georgian Airways is a flag carrier airline for the country of Georgia. It has a fleet of 9 airplanes and has different types of modern airplanes in its fleet. It is the preferred airline to travel within Georgia and in countries neighboring Georgia plus it offers great prices for different types of trips to and from Georgia. The ticket prices are displayed in Euros making it easier for Georgians as well as foreigners to buy tickets on the website.

Georgian Airways is the national air carrier in Georgia and its main headquarters and base are Tbilisi and Tbilisi International Airport. The focus city for this airline is Batumi and Batumi Airport. This airline serves over 20 destinations in Georgia and foreign countries mainly in the Europe and Asia region. This includes destinations in countries like Armenia, Austria, Bahrain, Belgium, France, Germany, Greece, Iran, Russia, Spain, Slovakia, and the United Kingdom. Georgian Airways website has all the information about the hubs and destinations that this airline caters to for customers looking to travel with this airline.

There are different categories for baggage allowance for children and adults at this airline company. Georgia Airlines offers one piece of check-in baggage for business as well as economy class. The carry-on baggage must be less than 8 kg for Economy Class passengers and less than 12 kg for Business Class. Business Class is allowed baggage 32 kg of baggage and Economy Class passengers is allowed 23-25 kg baggage depending on the destinations.

Georgian Airways Food: Food aboard Georgian Airways is cooked shortly just before the departure and are prepared using fresh local produce. Both Economy Class and Business Class food menus are available online on the official website for the passengers to check. Fasting Menus are offered on religious holidays

Georgian Airways Beverages: Tea, Coffee, Soft Drinks, a variety of lemonades and Georgian mineral water are all served in the flight for both Business Class and Economy Class travel with Georgian Airways.

Georgian Airways displays its top destinations on their website with the ticket prices. It also has a portal on the website where customers can choose their flights and then directly book the flight through the website. Passengers can book one way, multi-way or return tickets through the website. Georgian Airways flight information also appears on many travel and flight aggregator websites and these websites redirect passengers to booking information about the flight. All information about booking flights for pets, for unaccompanied minors, for families with small children and other booking policy details are all available on the official website of the airline.

Visit Georgian Airways site for web check-in http://www.georgian-airways.com/ and navigate to manage to bookings. You may have the option of online Georgian Airways Web check-in and boarding pass if still, you are facing any problem please call +995 322 485 511. 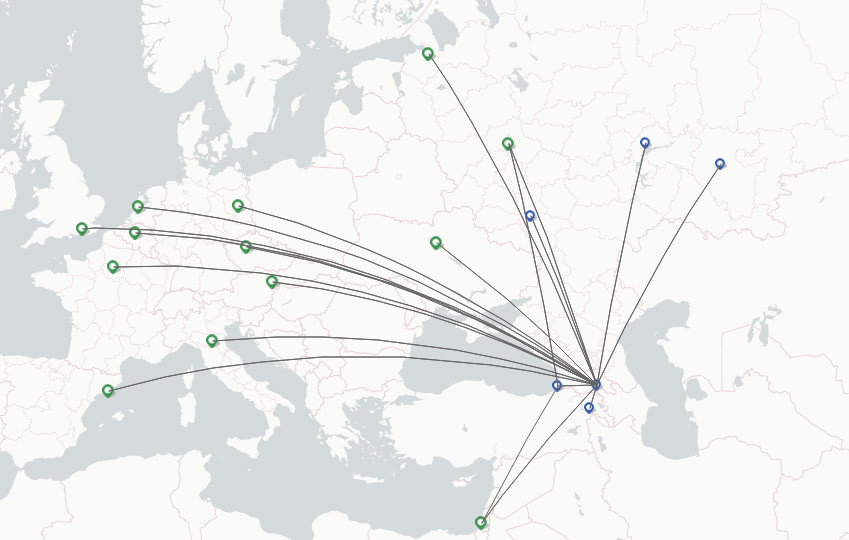