There has been a major transformation in the Eurowings airlines recently. Eurowings has been developed into a low-cost carrier since spring 2015, for both short-haul and long-haul flights.

On 1st February 1993 two commuter airlines, Nürnberger Flugdienst(NFD) and Reise -und Industreflug (RFD) merged to form the Eurowings Airlines. In 2001, Lufthansa took an initial stack of 21.9% in Eurowings and increased it to 49% in 2004. Since 2005, Lufthansa acquired full control on the airline and assumes complete ownership in 2011. Eurowings short haul flights that did not operate from Frankfurt or Munich were trans to Germanwings from Lufthansa. Eurowings flights operating on behalf of Lufthansa Regional were ceased in autumn 2014. These flights were then rebranded to Germanwings.

Eurowings announced to replace majority of its aircrafts and also to order some new aircrafts. They also announced the transformation of Eurowings into a low-cost short and long haul carrier by 2015.

The first base of Eurowings outside of Germany was at Vienna International airport. The aircrafts at Vienna International airport were planned to be operated by Autrian airlines but under the branding of Eurowings. But On 2nd October 2015, the plans were changed and all these flights were operated by Euroways Europe itself instead of Autrian airlines.

The fleets that are operated by Eurowings and it's partner airlines comprises of cutting edge technology and are always kept up-to-date. The fleets owned by Eurowings are A340, A330, A320, A319, Boeing 737 and Dash 8Q-400. The ground crews of Eurowings are giving ongoing training to meet the demands of aviation today. The crew members of Eurowings boast years of experience to provide best class travel experience to its customer. On going trainings are provided to the crew members at the Lufthansa flight training centre in Frankfurt and hence it results in maximum safety and top service to the passengers of Eurowings.

Eurowings flies to more than 120 destinations in Europe at low cost. It also flies to some tourist destinations around the world. All the destinations have proper connections with cities or holiday spots. You can view the list of all destinations of the official website mentioned above.

The speciality of Eurowings Airlines lies in its low-cost flights. It is also said to be Europe's fastest growing Airlines. Eurowings is worlds best low-cost airlines in Europe and it is also one of the best long-haul airlines in the world.

Eurowings offers light snacks, non-alcoholic beverages and delicious meals. Passengers are allowed to choose the meals while booking or can pay after boarding the plane. While booking you can choose between Basic, Smart, Best and BizClass fares to enjoy your meal. For more information about meals, you can visit the official website mentioned above.

Eurowings passengers can book their tickets online through the official Eurowings website. Eurowings also allow you to change your travel date if you are not able to travel on the date of departure. Eurowings passengers can make a seat reservation as well through the website. While booking process you can also add your additional baggage details or it can be added later also from the website or while boarding the plane.

Eurowings has four fare classes to make your journey convenient and in your budget.

The basic fare is the budget friendly class. It includes only the flight charges. Although Luggage and additional services can be availed later with the additional payment.

The Smart fare class is the standard fare of Eurowings. It includes one carry-on luggage, one checked in luggage, free seat reservation, priority boarding along with all the services offered by Basic class

The best fare is one level upper than the Smart fare class. It offers an exclusive seat in the Best class with more legroom, more baggage and the best meals. The Best fare is available exclusively for long-haul routes.

BizClass is the premium class of Eurowings. It is available for short, medium and long-haul routes. It offers maximum comfort. It also offers best class service and consumables. 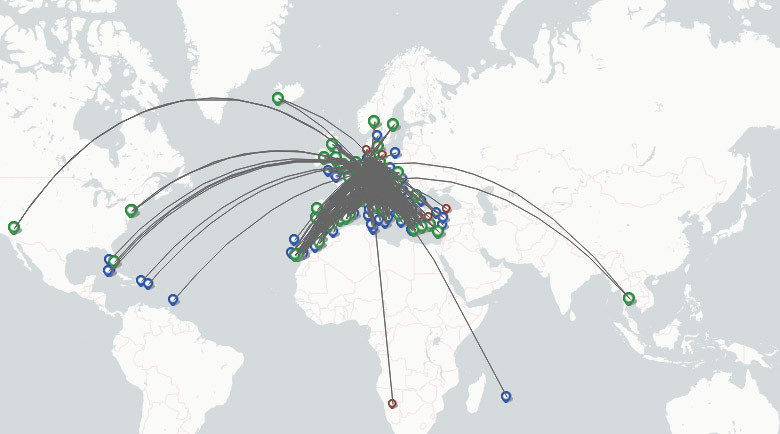