Visit the official website at www.elal.co.in   for more details about flight bookings and services by the company.

The El Al Israel Airlines Limited was founded in 1948 with headquarters in Ben Gurion Airport of Israel. The company started its business after inauguration by flying from Geneva to Tel Aviv in September of 1948. With serving over 50 destinations the airlines operate domestic and international flights from Israel to Europe, covering the Middle East, America, and Africa from its headquarters at Ben Gurion. It is a commercial airline which has got its aircrafts protected by missile defence system and hence is known among the most secured airlines. Due to the high level of security, to date only one flight could be hijacked and that too without any fatalities the passengers were rescued.

In 1948 the first president of Israel Chaim Weizmann came for attending a conference in Geneva and was supposed to get back by an aircraft provided by the government but as Israel was under the imposition of embargo hence an Israeli C-54 military transport aircraft painted with the name EL AL National Aviation Company and it departed from the Ekron Air Base taking Chaim Weizmann back home. From carrying freight and cargo to transporting passengers, the company increased its activities in the market during 1950-1951 and listed in its destination spots few more places like Vienna, Istanbul, Athens, and Nicosia. It celebrated its anniversary on the 31st of July 1950. The airway has helped a lot in the rescue mission of Jews from other countries to Israel setting a record of carrying 1088 passengers in a single aircraft in 1991. The operation was called Solomon.

The slogan of the company is ’It is not just an airline. It is Israel’  which means ‘The most at home in the world’. Key people of the airway are Amikam Cohen the Chairman and Gonen Usishkin the CEO. It employs over 36,500 people and has 60 destinations to date to cover. The size of the fleet is 43 carrying 4 million passengers and earning revenue of $2.04 billion (dated 2016) covering loss of $80.7 million to a profit of $57 million in the year 2010. EL AL got its first Boeing 747 jet in 1971 and in 1973 another one was delivered to provide non-stop services from Tel Aviv to New York. Later in 1989, it added Poland and Yugoslavia to its list.

EL AL covers four continents by covering 31 countries serving the cities of North America, Central and southeast of Asia and also the far East. Due to political instability between Saudi Arabia and Isreal, it cannot cover larger parts of Asia as it has no permission to use the airspace of Saudi Arabia. If this continues then EL AL will lose a heavy share market over Asia as other Indian Airlines have been granted permission by Saudi Arabia to use its airspace for travelling to Tel Aviv from New Delhi. It has codeshare agreements with the following airlines ; Aerolineas Argentinas, Aeromexico, Air China, Air Serbia, Alaska Airlines, American Airlines, Ethiopian Airlines, Hong Kong Airlines, Iberia, JetBlue, LATAM Brasil, LOT Polish Airlines, Qantas, S7 Airlines, Swiss International Airlines, TAP Air Portugal, Thai Airways, Vietnam Airlines. The only hub is Ben Gurion Airport.

Services and comforts provided by El AL are;

Entertainment in-flight by AVOD screens with streaming iPads and smartphones is provided by an EL AL app.

The baggage allowance rules are quite lenient in this airline where one can take off with Hand Luggage, Matmid Frequent Flyer baggage, Excess baggage or additional baggage at certain prices, Hand baggage, Liquids in Hand, Baggage free travel, carry pets following certain rules. There are policies and help for lost or damaged baggage as well and surely high security checking before letting in the flight.  The limit of allowance is 23 kg per person for economy class and 32 kg per person for a premium or business class.

The airline has an agreement with Tamam (fully owned) for the supply of kosher meals to the companies. Katit, another fully owned company) supplies meals to the staff and passengers along with refreshments and snacks from time to time.

For bookings and other information required flight timings, destinations, services, offers prevailing and discounts one needs to check the official webpage and choose among the various options and facilities provided.

There are four types of classes available on flights;

First Class- Booked for celebrities, the staff serving here are highly trained and the standard of everything shoots up to the most.

If you are looking to make El Al reservations visit our website airlinesmap.com or can book with direct El Al official website http://www.elal.co.il/ You may call our toll free number 888-220-0490 or direct El Al number +972 3 977 1111. Get more information about El Airlines Reservations and Flights Tickets to click below.

Find the latest updated El Al baggage policy at El Airlines baggage policy and allowance or you can visit the official website of the El Al's baggage page http://www.elal.co.il/ . You may call +972 3 977 1111 for baggage rules.

Visit El Al site for web check-in http://www.elal.co.il/ and navigate to manage to bookings. You may have the option of online El Airlines Web check-in and boarding pass if still, you are facing any problem please call +972 3 977 1111.

It's very easy to claim El Al cancellation and El Al refund call direct phone number of +972 3 977 1111 or visit official site http://www.elal.co.il/ manage bookings. You may have the option to refund or cancellation. 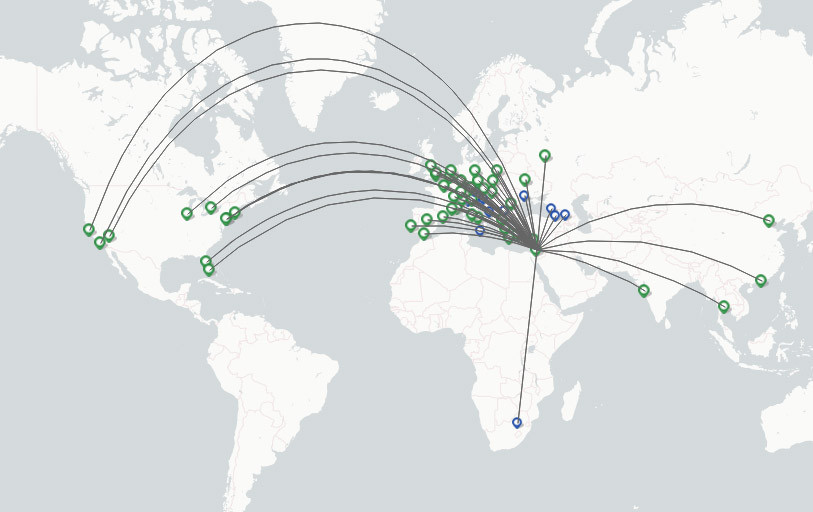