For the best deals on flight booking and discounts on tickets, visit www.airvanuatu.com which is the official site for Air Vanuatu flights. Huge discounts and other coupons are available throughout the year can be easily availed from the official website.

Air Vanuatu is a small airline service with its headquarters in the Air Vanuatu House at Port Vila Vanuatu. The Airline's National flag Carrier operates from Australia to New Zealand and some points in the south Pacific. Its main base is in the Bauerfield International airport in Port Vila.

The Air Vanuatu was established in early 1981 after Vanuatu gained its independence from the United Kingdoms and France. Air Vanuatu was launched with collaboration with Ansett Airlines and the Local government. The first flight their McDonald Douglas DC 931 which was owned and operated by Ansett airlines departed from Sydney for Port Villa on the 5th September 1981. In 1982 a Boeing 737 replaced the DC-9 and this was in return replaced by the Ansett 737 in October 1985. The airlines were grounded in 1986 after the agreement with Ansett expired and it was re-established in 1987 with 100% ownership by the government of Vanuatu.

The Air Vanuatu has a total of eight flights the latest being the de Havilland Canada DH6 Twin Otters which was put to service in 2016. The Director-General of various Vanuatu Government Ministry now controls all the dealing after the Board at Port Villa was sacked.

The Air Vanuatu with its little fleet size covers all the 28 operational routes throughout the country. The country of Vanuatu is itself a holiday destination. People from all over the globe come here to enjoy the tribal life and trekkers come here to travel along Ambryn Island. The fleet covers important countries like Australia, New Zealand, the Fiji Islands, New Caledonia, Solomon Island and Papua New Guinea. For more details on the destination and the hubs you can surf through the internet or you can visit the official site that has been mentioned above.

The airlines provide some special features to all its borders.

Like all other airlines, the Air Vanuatu has some special luggage allowance rules that must be followed.

For flights from Australia and New Zealand

For flights from Solomon Island and Papua New Guinea

For a flight from New Caledonia and Fiji

Infants are usually entitled to 10 kgs for checked-in luggage.

You will have to pay extra fees if you are having excess luggage. This fee should be paid before boarding to avoid any kinds of confusion.

Unlike all the other airlines, Air Vanuatu provides some complimentary drinks or meal with the ticket.

All the flights from Australia and New Zealand operated by 737 - 800 usually offer a business class cabin serving a premium 4-course meal including full bar service.

You can either book the tickets online from the official website or you can book from any other portal.

Usually, there are two classes:

• Economy class: The price is less so is the number of benefits.

Visit Air Vanuatu site for web check-in http://www.airvanuatu.com/ and navigate to manage to bookings. You may have the option of online Air Vanuatu Web check-in and boarding pass if still, you are facing any problem please call +678 20 200.

It's very easy to claim Air Vanuatu cancellation and Air Vanuatu refund call direct phone number of +678 20 200 or visit official site http://www.airvanuatu.com/ manage bookings. You may have the option to refund or cancellation. 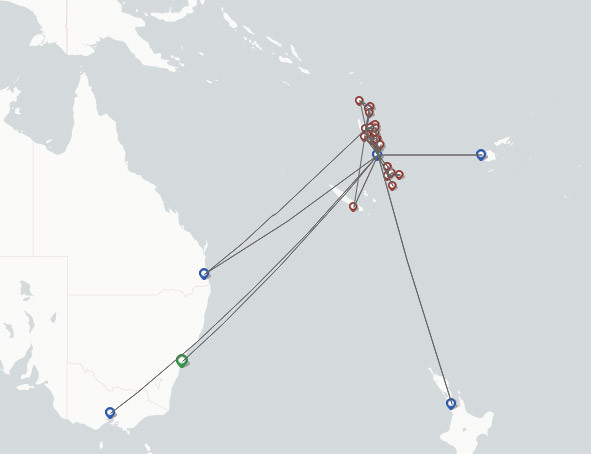 1. Can I be denied boarding on Air Vanuatu if my name or title on the booking does not match the details on my photo identity card?

Yes, Air Vanuatu has the full authority to deny you from boarding if the name or title mentioned on your itinerary does not match the name or title on your identity card. If there is a situation that involves a change in surname in a short notice right after marriage then you can let the airline know, which can still be considered in domestic flights depending on the airline you’re travelling by.

2. What is required to enter the airport terminal and check-in at the counter?

Make sure you have your government-approved photo ID with you and a printed copy of your e-ticket to make your way into the airport terminal. Soon after the verification, you will be given your boarding pass at the check-in counter.

3. What is allowed in cabin baggage Air Vanuatu?

It is not much that Air Vanuatu allows under cabin baggage. They are pretty strict with their baggage allowance, hence allows one bag per person within their restricted size.

4. Can we carry food and alcohol in the Air Vanuatu Flight?

No, Air Vanuatu does not allow any food from outside on board. Alcohol can be brought in within a limit that too in checked-baggage.

5. How can I pre-book Air Vanuatu extra baggage and its charges?

You can pre-book Air Vanuatu extra baggage by contacting the airline either via their customer care number or the information you’re provided with while booking your ticket. There will be extra charges imposed on the extra baggage though.

6. How can I get discounted coupons Air Vanuatu airlines?

If you visit the official website of Air Vanuatu https://www.airvanuatu.com/ , under the category of Deals and Promotions you will get some of the best offers ever. Depending on the region you will get your deals.

7. Does Air Vanuatu have WIFI?

Air Vanuatu offers WIFI on board to their customers to connect their devices with and enjoy TV shows including drama, top-rated comedies and many other shows. This is a part of their in-flight entertainment for you to sit back and relax.

8. Does Air Vanuatu provide food? veg /non-veg. And can I carry my snack onboard to eat?

Yes, Air Vanuatu offers an array of meals onboard including certain complimentary snacks and beverages onboard. They have been specially put together by some of the experts in the culinary world. However, this restricts you from bringing in your food. They have a special meal for people with a preference; all you have to do is place your order in advance.

9. How I can make a reservation with direct Air Vanuatu airlines?

If you want to make a direct reservation with Air Vanuatu airlines visit their official website on the internet and make your booking.

10. How can do date change in Air Vanuatu airlines flight?

If you want to make changes to your date and time with Air Vanuatu airline flights contact their customer care directly to get the necessary assistance. Make sure the change is not last hour you must have at least 24 hours in hand before your departure. This leaves an opportunity for refund or cutting down on any extra charge levied on you.

11. What is the direct phone number of Air Vanuatu airlines customer care?

In case you have any inquiry regarding your flight you can always contact the airline’s customer care which is available 24*7 for their customers. They have different customer care numbers based on region. The common number for further assistance is 1300 780 737.

12. What onboard services will Air Vanuatu offer?

13. Will Air Vanuatu have air-conditioned buses to take people to the aircraft?

No, there are no air-conditioned buses offered by Air Vanuatu to take the passengers from the airport to the airbus.

14. Can I interline my Air Vanuatu flight with other domestic and/or international airlines?

Yes, you can interlink your Air Vanuatu flight with any other domestic and/or international flights.

15. How to book tickets for Air Vanuatu airlines?

To book tickets with Air Vanuatu, airlines go to https://www.airvanuatu.com/ their official website and you will see the booking option on the homepage itself.

In case you have misplaced your e-ticket, view your ticket from MY BOOKING button on Air Vanuatu website and then get it printed.

17. How to arrange for special meals with Air Vanuatu airlines?

If you have any special dietary requirements you can surely place your order for a special meal when you’re booking your ticket or you can simply call the airline and place your order. Please make sure that this is done at least 12 hours before the flight.

18. Being a visitor can I purchase a one-way ticket with Air Vanuatu airlines?

No, you cannot purchase a one-way ticket with Air Vanuatu airlines unless and until you’re a resident of the place.

19. How to check if my online booking is done properly with Air Vanuatu?

You can always check you're booking by simply going to the “online booking and payment” section on the official website.