Air Corsica has its official website as www.aircorsica.com. You can book your tickets through this website. All the information is given here and special offers and deals are given to book your flight at a lesser price.

Air Corsica is a regional French airlines which has its headquarters in Ajaccio-Campo dell’Oro  airport in Ajaccio. This airlines has its service from Corsica to continental France. This serves as the “wings of the Mediterranean” region.

This airline was known as CCM airlines before it acquired this name. This was established on 1st January, 1989 and it started operating on 1990. Its name was changed to CCM airlines on January 2000 and Air Corsica on October 2010. Its network boosted up when they had a  partnership with Air France. 14th June 2005, 6 new aircrafts were to replace one more aircraft and the deliveries took place between and mid-2007 when these were operated under Air France.

This airlines has 11 aeroplanes with 5 Airbuses with 180 seats. This has 16 different airports and 30 annual seasonal routes which it serves. Moreover, this has 660 permanent employees with its headquarters at Ajaccio and its secondary maintenance base at Bastia. There are nearly 1.6 million people transported every year. This represents 25000 flights annually and 800 flights per day during summer. This company had a turnover of 180 million Euros and 90 million is the increase observed every year.

Air Corsica has the codeshare agreement with the following airlines:

There are about 16 destinations, 1 main headquarter and a secondary maintenance base. The destinations include places in Belgium, France and United Kingdom. Some destinations are seasonal are operated at specific seasons only. This serves 17 airports as well as the same or more number of destinations with direct flights. The regular flights exist with four airports in Corsica, metropolitan and international airports. This is known to build a bridge between Corsica and French region as well the regions in Belgium and United Kingdom.

This airlines is known for its hospitality. This has a good seating arrangement. Flights arrive on time and have a good leg space for the passengers to feel comfortable. The cabin and the crew are kind enough to help us out whenever in need. It also has reasonable prices according to the place we need to travel to. The flight is also maintained with good hygiene. It has good reviews on the internet and is reliable on a general basis.

The allowed weight of the baggage is 23kgs. Each passenger can carry one item in hand luggage aboard. According to your excess luggage, Air Corsica charges you based on the number of other items you want to carry inside the flight. When you have special baggage, the sales support must be consulted before you take it inside. This luggage will be charged differently unlike the other ones. These special luggage include sporting equipment or any luggage which exceeds the weight of your travel luggage which you carry inside the plane. You also have a freight category which includes fragile, dangerous or very heavy luggage which has to be handed over before going aboard.

As soon as you enter the flight and settle down, they will serve you with soft drinks. They also have magazines for passengers to read. After some time they will serve you with a light meal according to the course of the day and the flight you are in. Pre-booking of your meal is possible with extra money given while booking your tickets. Earplugs, refreshing towels and blankets will also be provided to the passengers onboard. You can also find newspapers and the Aria magazine which will help you not to feel bored during the journey.

To book tickets in this airline, visit the official website which is given at the start. Booking tickets on this website is quite simple. You just need to enter the place where you need to board the flight from, the destination and the date of your journey. You can also look for offers this airline offers you depending on the date and the place. You then need to enter your personal details and choose the payment method. After you have confirmed your payment method, the desired seat can be booked and your seat is confirmed.

Economy class: Used to small hour flights and is lesser in cost as compared to the business class.

Visit Air Corsica site for web check-in http://www.aircorsica.com/ and navigate to manage to bookings. You may have the option of online Air Corsica Web check-in and boarding pass if still, you are facing any problem please call +33 8 25 35 35 35.

It's very easy to claim Air Corsica cancellation and Air Corsica refund call direct phone number of +33 8 25 35 35 35 or visit official site http://www.aircorsica.com/ manage bookings. You may have the option to refund or cancellation. 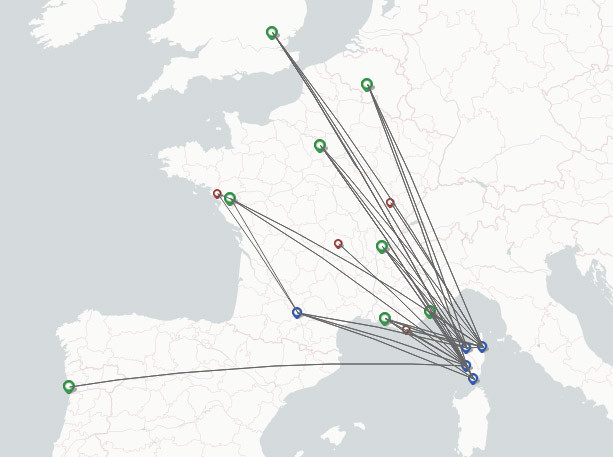