Air Baltic is the national airline, also called flag carrier of Latvia, and has its headquarters at the Riga International Airport in Riga, with hubs at Riga International Airport, Tallinn Airport and Vilnius Airport, making it one of the largest airlines to be operating in the country. A fleet size of 39 planes allows it to operate flights to destinations all over Europe, with most of them being leisure and tourist destinations. Its expansive size makes it quite well known in Latvia and other countries. You can check out the deals, sales and discounts offered by the company at their official website www.airbaltic.com.

Air Baltic is the most famous airline to be operating in Latvia, a position they reached through providing flawless services for more than 23 years to the country of Latvia. Almost wholly owned by the Government of Latvia, this airline flies to 72 destinations all over Europe, and is known to be the best airline to book tickets on if you want quick flights with competent and comfortable services.

Air Blatic was established on 28th August 1995, as the result of a venture between the Latvian State and Scandinavian Airlines, with operations starting on October 1st, 1995 using a Saab 340. Air Baltic became a joint stock company in 1999, previously being a limited liability company, having all of their Saab 340s replaced with Fokker 50s. Martin Gauss became the CEO in 2011, replacing long term president Flick after a period of total loss.

When it was established, Air Baltic became instantly famous throughout Latvia and other neighbouring countries, as it was the only airline to be operating out of Latvia. Going on to become a pretty well known airline, Air Baltic now offers passage to more than 70 leisure, tourist and attractive destinations throughout Europe. If you want the quickest flights, combined with a fairly decent level of service provided to the passengers, Air Baltic is definitely the airline for you.

Air Baltic, one of the biggest airlines to be operating in Latvia, has no less than three different hubs across the country, with its primary hub at Riga International Airport and two secondary hubs at Tallinn Airport and Vilnius Airport respectively. Being a fairly large airline, they have codeshare agreements with a lot of other airlines, with some of the largest and most prominent being:

Air Baltic provides passage to more than 70 destinations spread throughout Europe, with an international network of destinations that is quite impressive. Operating tens of flights each and every day, Air Baltic flies thousands of passengers every week to different exotic, luxurious and tourist places all over Europe.

Air Baltic specializes in quick flights with a competent level of service and a decent level of comfort provided to the passenger, as it is one of the fastest airlines in the country. With a trained, courteous and attentive flight crew, they make sure to take care of the passenger’s needs, along with solving any problems the passenger might have.

Air Baltic enforces strict rules on their passengers concerning the weight rules, with any and all violations being heavily fined. Both Economy and Business class are allowed only a single piece of carry on luggage, with the weight limit for Economy being 10 kilograms and 14 kilograms for Business, since Business tickets face fewer restrictions.

There are no complimentary food dishes that come with the tickets, but passengers are given the option of buying food directly on the plane, with cash. The same thing applying to drinks, there are no complimentary drinks, but passengers have the option of purchasing drinks right on the plane with cash. There is a limit on the amount of alcohol a passenger can drink.

Being one of the most well known Airlines in the area, you can book Air Baltic tickets from just about of the normal and standard ticket booking portals, such as travel agencies and online websites. You also have the better option of visiting their online portal, www.airbaltic.com, to book tickets and find out more information about the company and any offered deals and discounts.

The classes that are available in Air Baltic are –

Their frequent flyer program, PINS, makes sure that passengers are able to take advantage of the miles they have already flown.

Visit Air Baltic site for web check-in http://airbaltic.com/ and navigate to manage to bookings. You may have the option of online Air Baltic Web check-in and boarding pass if still, you are facing any problem please call +371 6 700 60 06.

It's very easy to claim Air Baltic cancellation and Air Baltic refund call direct phone number of +371 6 700 60 06 or visit official site http://airbaltic.com/ manage bookings. You may have the option to refund or cancellation. 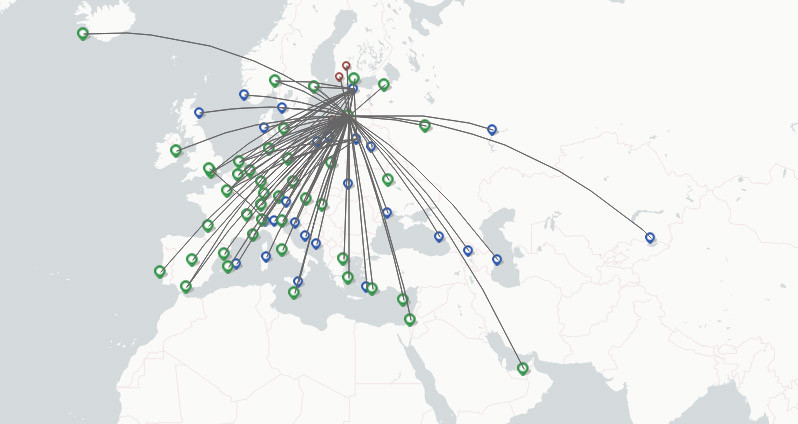