The airline has another name as OJSC National Air Company Uzbekistan Airways. It is operating under the name of Uzbekistan Airways and is one of the flag carrier airlines of Uzbekistan and has its headquarters located at Tashkent. Its main hub is the Tashkent International Airport. Several domestic and international destinations are served by this airline. Head towards their website to know more about them -​​www.uzairways.com​.

Established in the year 1992 the airline is into the carrier service for the last 17 years and is committed to providing quality in-flight services to its guests. The fleet consists of 32 aircraft through which it serves several destinations. The number of destinations served is almost 58. It has a slogan that goes well with the services provided by the company, "National Airline of Uzbekistan". Its operations are looked after by a parent company named as Government of Uzbekistan.

After its establishment, the airline took over the operations of the Aeroflot's Uzbekistan division in the year 1992. Initially, the Russian built aircraft that were owned by Aeroflot was used by the company to fly to domestic destinations. Later, when it decided to serve international destinations as well as Airbus aircraft was also introduced in 1993. This airline was the first customer of Ilyushin II- 114, which was a locally assembled aircraft. In the year 2014, the airline is believed to carry almost 2.5 million passengers.

With the cooperation of the president of the country, this company can work on the development of Uzbek Civil Aviation and is also to promote the large scale program of modernization, fleet renewal, betterment of infrastructure, etc. It operates to almost 40 cities of the world serving many destinations overall. It has successfully achieved its aim to be one of the leading players in the industry in terms of air transportation. It provides comfortable aircraft, developed modern terminals, safe flights, etc.

It provides great seating facility to all its passengers. Added advantages are given to business-class passengers and it is always ensured that they enjoy a great flight and a good travel experience. The seats of business-class are comfortably wide that has a leather covering along with a separately adjustable footrest. The economy class seats are also well equipped and comfortable with modern modifications in them. They also have a special menu available for their passengers that includes starters, main courses, desserts, beverages.

A handbag is permitted in flight that the passenger can carry along. Its dimension should not exceed 115 cm. The checked baggage has a maximum limit for passengers travelling in different classes and the luggage should not exceed that limit. Extra charges are applicable in case it weighs more than the mentioned weight. Business-class passengers can carry a weight of up to 30 kgs, whereas 20 kgs of weight are allowed to those travelling from the economy.

The fare charged by the airline includes the charges of meals that served on board. However, the option varies for passengers travelling from the economy. They are served cold snacks, vegetable snacks, desserts, soft drinks, bread, etc. Alcohol is also served in some routes. Business-class passengers can order anything from the onboard menu they have, it has a variety of options available right from beverages, starters to desserts as well.

Hassle-free booking options are available on their website. All you need to do is just select the travel date, destination, timing and a whole list of available flights come up matching your requirements. You can choose from there and can also provide some special instructions you need to be followed while you are travelling. Special meal instructions should be provided 72 hours in advance of your travel time.

If there are any special instructions regarding the meals then it should be notified beforehand so that necessary steps are taken. 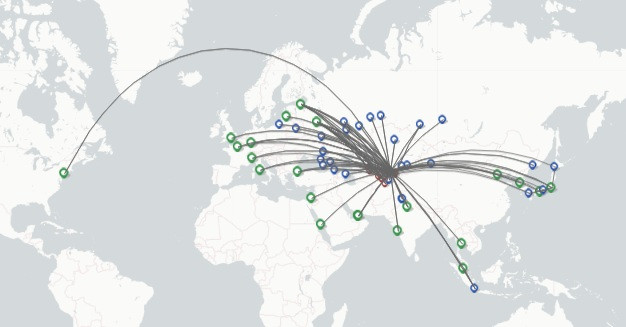