For the best of deals on tickets and flight bookings, you can visit the official website of TAAG Angola Airlines www.taag.com   which is the only known authentic website available on the internet. All the necessary information and details are available on the website. The website keeps on adding new destinations and packages every day.

TAAG Angola Airlines EP is a state-owned national airline of Angola. The airline is based in Luanda and it operates all Boeing flights on all the domestic routes with Angola, medium-haul services in the whole of Africa and long haul services to countries such as Brazil, Cuba, China and Portugal. The alliance was originally known as DTA in 1973 but later it gained the flag Carrier status in 1975 and is now a well-known member of both the International Air Transport Association and the African Airlines Association.

The origins of the airline carrier can be traced back to 1937 when the president of Portugal decided to create an airline in Angola. On September 1938, DTA was found as the main division of the administration of railways, all the harbours and the air transportation of Portuguese West Africa. It was owned and maintained by the government and the airlines began its operation on the 17th of July 1940. The first route to be operated was One running between Luanda and Pointe Noire with connections to Aeromaritime services to Europe. The airline came to be known as TAG on the 1st of October 1973 after the airline was reorganized and reconstituted.

The airline was founded in September 1938 and began its operation only on the 17th of July 1940. The main hub is the Quatro de Fevereiro Airport and the only subsidiary is the Angola Air Charter. With a small fleet size of 12 advanced aircraft and with the slogan TAAG always your company, the airline is known to connect over 31 destinations in the whole world. The government of Angola is the parent company and the headquarters are at Luanda, Angola. According to a recent census the company earns a profit of over 5 million US dollars. The Airline was about 3268 employees.

As of October 2014, TAAG Angola Airlines serves 31 destinations which include 13 domestic routes, 11 routers in Africa and three in Latin America, two in Europe and three in the Middle East and the Asia Pacific region.

For more details on the destinations and hubs connected by the airlines, visit the official website or you can search through Google.

Like most of the other Airlines, TAAG Angola Airlines provides all its passengers with special benefits.

Like most of the other Airlines, TAAG has some Baggage rules which all the passengers have to follow.

This luggage is usually transported in the cargo section of the plane and cannot be accessed while you are travelling. The hold luggage allowance varies is on the type of route and the type of seating.

For excess luggage, you will have to pay in extra either beforehand via online or at the time of boarding.

Unlike most of the other Airlines, TAAG Angola Airlines provides complimentary food and complimentary beverage to all the passengers regardless of their class of sitting.

The airline promises to provide all the passengers with board meals during the usual meal hours and the meal preparation, the menu and the complexity depend on the flight class. The business and the first class are offered higher quality meals and variations.

TAAG Angola Airlines Special meals: The airline offers a special meal to all the passengers who request them without any additional cost. All you have to do is mention the meal whenever you are booking the flight ticket.

You can book the flight tickets from the official website that has been mentioned above.

There are three types of classes: 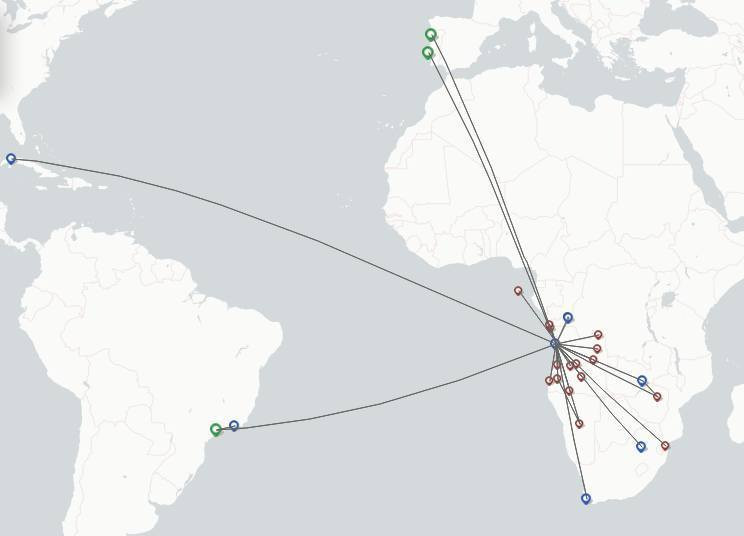