Solomon Airlines is the carrier for the Solomon Islands. It is the national airline of that place and is based in Honiara. You can find great deals from, to or within the Solomon Islands on their website. When you’re visiting Solomon’s for a holiday or a business, this national carrier is the best choice because it is cost-effective and easy to book. Right now, Solomon airlines are expanding their territory and charting new routes to international cities. You can find more information on their website.

If you ever want to travel to the Solomon Islands, this national carrier gives you great flights and choices. It offers services to Papua New Guinea and Vanuatu where there is an archipelago of 992 magical islands which are collectively called the Happy Isles. Solomon Airlines is the leading provider of flights to and from the Solomon Islands, both domestic and international. Right now it is going from strength to strength and is expanding its territory to include more international flights. This diverse group of dedicated people has engaged in the following core businesses which include domestic and international air, charter and cargo transport.

Solomon airlines were established in 1962. It was introduced as a charter airline by Laurie Crowley. The charter operations began in Papua New Guinea here with occasional charter flights to the Solomon with an aircraft called the Piper Aztec. At that time there was no commercial aircraft that were based in the Solomon Islands. So Crowley decided to start an airline and call it the Megapode airlines. Pretty soon Macair purchased Megapode in 1968 and changed the airline’s name to the Solomon Islands Airways. It changed operation from charter flights and added regularly scheduled flights. Under this new leadership, they serve the islands and other places.  In 1975, the SOLAIR subsidiary and Macair were purchased by Talair. The Solomon Islands government also bought 49% of the shares of that airline and tried to purchase the remaining 51% over the next five years. After the full government takeover, the sale of the airline and its assets were completed. The government was faced with the task of rebuilding this airline and invested almost $2 million to buy two new aircraft. The name was soon changed to Solomon airlines officially. A Boeing 737 was bought and it was upgraded to international services. By November 2006, the airlines obtained a new Boeing aircraft including pilots and cabin crew. Then in August 2009, the Airbus A320 aircraft including pilots released from Strategic Airlines. On June 7, 2016, Solomon airlines had suspended all operations including domestic and international flights and ground operations. Passengers were stranded because the government failed to pay millions of dollars in arrears. But the airline resumed operations on 9 June 2016.

Solomon Airlines is the national airline that takes passengers to and from the Solomon Islands.  It has the fleet size of five aircraft and has routes to over 27 destinations.  It has regularly scheduled flights to domestic and international destinations. It is expanding its routes even more territories.

Solomon Airlines has regular services and operates from Honiara. It has an international network that includes:

Solomon Airlines also has an extensive domestic network and travels to many destinations around the world. Chartered flights can also be booked via the website. More destinations are being added and the fleet is being expanded. They also international destinations which include Europe, North America and Asia  You can travel to the Solomon Islands using this carrier. Check out the website to see you read the flight. There are international, regional and domestic routes.

Solomon airlines provide a reliable service that is designed to suit both leisure and business needs and provided an important link that connects local communities. At the Honiara airport, the Gateway of the Solomon Islands, you can get airport facilities, transport options and points of interest to help you get around. You can get refreshments, Wi-Fi, currency exchange, souvenirs and duty-free shops on arrival.

You can book trips to the Solomons and other flights using their website. There are also special offers and group bookings to help you out. Cargo shipping is also available.

Visit Solomon Airlines site for web check-in http://www.flysolomons.com/ and navigate to manage to bookings. You may have the option of online Solomon Airlines Web check-in and boarding pass if still, you are facing any problem please call +677 200 31. 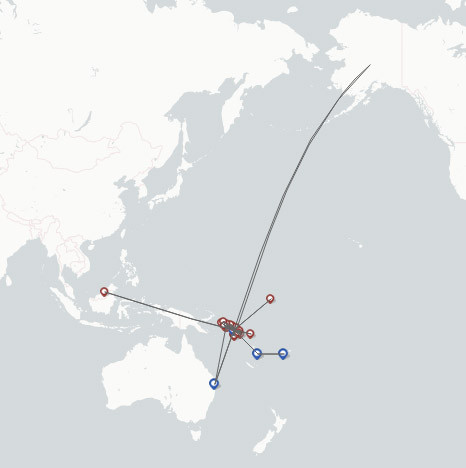