Smartavia is an airline that was formerly known as Aeroflot-Nord and Nordavia. It has its headquarters at the grounds of Talagi Airport in Arkhangelsk, Russia. Its operations include scheduled domestic and regional services. It also has another base at Moscow Domodedovo Airport. It is a very popular airline in Russia and has lots of destinations and routes to several places around the world. Some of these destinations include Moscow, Arkhangelsk Murmansk etc. They operate mainly in Russian territory and offers cost-effective flights. To know more about this airline you can visit their website.https://www.flysmartavia.com/

Smartavia is a Russian airline which operates mainly on scheduled domestic flights. With over 14 aircraft in its fleet and routes to over 21 destinations, it is a big airline which caters to Russians with a variety of services.  It focuses on cities such as Murmansk, Moscow Domodedovo and Saint Petersburg. It has headquarters in two bases, Talagi Airport and Arkhangelsk Airport. People use this airline to travel mostly to domestic destinations at a low cost.  To know more about Airlines and services, you can visit their website.

The airline was first formed back in 1963 as the Arkhangelsk United Aviation Squadron. Aeroflot acquired 51% of the airline in 2004. The company was soon renamed and became Aeroflot’s second airline of the region. It also joined the European Airline Association in the month of December 2006. The contract with Aeroflot ended on 1 December 2009 and the airline become independent.  It was named Nordavia. Because of bad press after the Aeroflot Flight 821 disaster, the airlines imposed restrictions and put a ban on all international charter tours. Aeroflot and Nordavia operations were also revamped because of insufficient security and bad finances. But Aeroflot still distanced itself from Nordavia because of all the bad press. In March 2011, the airline was sold to Norilsk Nickel for a whopping 7 million dollars. Nordavia was ultimately sold to the owner of Red Wings Airline in March 2016. To increase businesses, Nordavia and Red Wings merged. Finally, its name was changed to SmartAvia. It changed the colours of the aircraft and switched to the Boeing 737s. On 20 March, however, it was announced that the merger had been cancelled. It still changed its brand to Smartavia and now focuses on domestic flights.

Smartavia is a popular Russian airline which operates Domestic flights and offers regional services. It has a fleet size of over 14 aircraft and has routes to over 21 destinations. It has two bases in Russia. Its parent company is Sky Invest and has a long history. It offers low-cost flights and has codeshare agreements with Red Wing Airlines and S7 airlines. Its fleet consists of Boeing 737s. It has strict guidelines and offers various programs for its customers.

Smartavia flies to a variety of destinations in Russia. Recently after a disaster, the airlines imposed a ban on all international charter flights. It focuses mainly on domestic flights and offers services in the region of Russia. Some of these destinations include:

These are just a few destinations that this popular Russian airline travels to. It serves at a lot more scheduled destinations.

Smartavia operates scheduled flights in Russia and offers regional services. This makes it cost-effective. It also has programs that help people travel at low cost. It is currently trying to expand its services.

There are strict guidelines for luggage. People can only carry one hand on luggage on the aircraft and it cannot weigh more than 8 kg. You have to pay additional charges if it exceeds the limit. Other luggage also has a weight limit. Other special cargo such as pets, sports equipment, speakers and large utilities need special permission but can be carried on board. There is also a limit to the dimensions of the hands-on luggage. There are more rules and restrictions available on their FAQ section on the website.

You can purchase food and beverages onboard using cash. Smartavia provides nice little food packages and other items for purchase. You can also purchase alcohol but there is a limit to how much a customer can purchase. Food can also be reserved for the customer via their website.

With the help of their mile programs, you can earn miles and book your tickets using their website.

If you are looking to make Smartavia reservations visit our website airlinesmap.com or can book with direct Smartavia official website https://www.flysmartavia.com/ You may call our toll free number 888-220-0490 or direct Smartavia number +7 800 200 00 55. Get more information about Smartavia Reservations and Flights Tickets to click below.

Visit Smartavia site for web check-in https://www.flysmartavia.com/ and navigate to manage to bookings. You may have the option of online Smartavia Web check-in and boarding pass if still, you are facing any problem please call +7 800 200 00 55.

It's very easy to claim Smartavia cancellation and Smartavia refund call direct phone number of +7 800 200 00 55 or visit official site https://www.flysmartavia.com/ manage bookings. You may have the option to refund or cancellation. 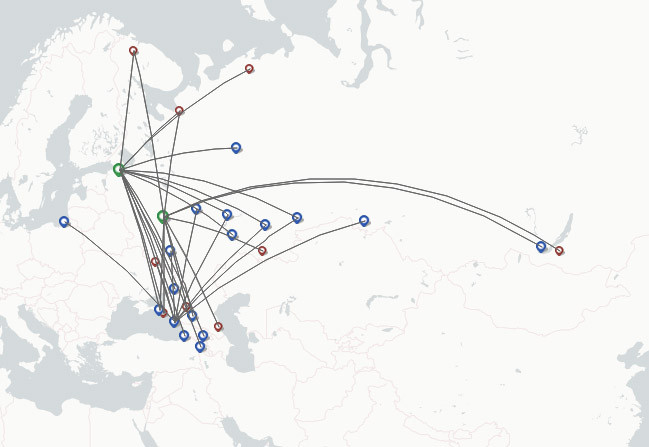