This is the flag carrier airlines of Jordan and it has its head office at Amman. This operates scheduled international services in four continents from the main base at the Queen Alia International Airport. This is also a member of the Arab Air carriers organization and the one world Airlines Alliance. This has more than 500 flights every week and it has around 110 daily departures. This was previously known as Alia Royal Jordanian Airlines. If you want to have the detailed updated information about the airlines, then you can get that all at the https://www.rj.com/

Royal Jordanian is the only main Arab carrier that serves Israel. It started to put into the place a new policy at the end of the year 2002 and it observed that the airlines concentrated on the nearby places with more the frequency. With a view to set itself as the Middle East's "regional airline" it started adding smaller routes like the Alexandria in Egypt to Aleppo in Syria which the bigger airlines, like Emirates, would not assume with the larger aircraft compared to Royal Jordanian's regional jets. By the end of the 2008 year, the plan had proven successful for the airlines and its mainrivals are Middle East Airlines and Egypt Air.

This airlines started in the year 1963 and its operations started in1963. In the beginning its nae was Alia. It founded with capital from some private shareholders, but the Jordanian government later took over the company. Then the operations were started with two Handley Page Dart Heralds and a Douglas DC-7 aircraft, serving Kuwait City, Beirut and Cairo from Amman. In 1964 one more aircraft was added to the fleet and the services started to Jeddah. In the year 1965 it started services to Rome, and this was its first destination in Europe. In 1968 the airlines expanded the routes to Nicosia, Benghazi, Dhahran and Doha. Then a catering department was started, and some duty-free shops were started at the

The airlinesserve many destinations like Abu Dhabi, Aleppo, Aden Yemen and many more. It also ahs the charter services those are controlled by the subsidiary Royal Wings.Additionally, it has code share agreement with many of the countries.

You can get the best amenities onboard. The passengers can get the best food and beverages and can also get any other facilities. The cabin seats provide more space and there is lot of comfort offered. The seats are soft and there is cleanliness maintained in each flight. There will also be many options available for the entertainment and there will be an in-flight magazine. If the flight duration is more then one can have the best relaxing sleep with the blankets provided. There will be also pillows and sleep masks so that one can get the sound sleep.

There are certain policies for the safety issues. You will not be allowed to carry with you any dangerous items like guns, cutters, knives etc.  You cannot take that with you in aircraft, but you can carry them in the checked luggage. Per person 23 kg is allowed and anything additional will be charged. You can take a small sized hand bag with you and that should not be more than 7 Kgs of weight.

You can make the online booking at the offal website mentioned above. You can get the confirmation of the same through a mail. You need to enter all the right details about yourselves while you book your flight tickets.

Visit Royal Jordanian site for web check-in http://www.rj.com/ and navigate to manage to bookings. You may have the option of online Royal Jordanian Web check-in and boarding pass if still, you are facing any problem please call +962 6 510 0000. 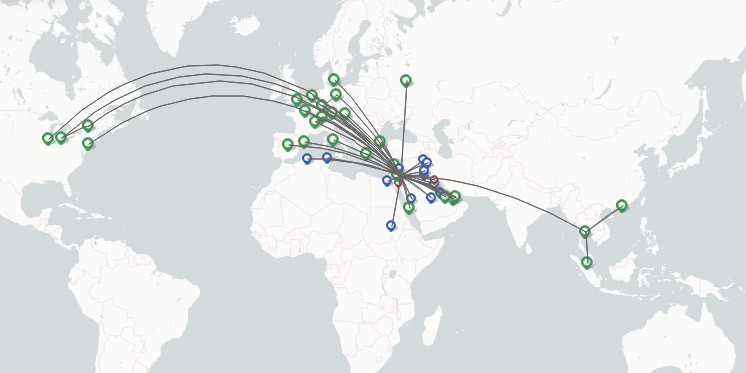