Japan is a major trading hub in East Asia and air cargo is an important aspect of domestic as well as an international movement of goods. The NCA Nippon Cargo Airlines is a top cargo airline in Japan and many local, as well as international companies use this airline to move goods. This airline has a great website called www.nca.aero which offers all the information about cargo flights with this airline.

As the name suggests, a cargo airline company is a transportation company that moves cargo from one place to another by air. NCA Nippon Cargo Airlines is a cargo company in Japan that moves cargo within Japan and also caters to destinations all across the world. It operates both scheduled as well as unscheduled cargo services and it caters to millions of tones of cargo every year. There are scheduled cargo flights to and from destinations in Asia, Europe, and North America.

This airline was founded in 1978 and it started its operations in 1985. This airline has an illustrious history as it became Japan’s first cargo airline company which was essential for the economy. This is a joint venture between Nippon Yusen and All Nippon Airways. ANA later sold their stake in the cargo airline and now this airline is wholly owned Nippon Yusen.

NCA Nippon Cargo Airlines has the headquarters in the Narita International Airport in Narita which is close to Tokyo which is the capital city of Japan. This airline has a fleet of more than 10 aircraft and most of these aircraft are well equipped and technologically advanced to carry large shipments of cargo. The main aircraft on this fleet is the Boeing 787-8Fs aircraft which are as mentioned made by Boeing which is one of the best airline manufacturing companies in the world.

NCA Nippon Cargo Airlines is a Japanese cargo airline and there are many hubs for this airline in cities in Japan. The airline’s hubs include Kansai International Airport, Naha Airport and the famous Narita International Airport in Narita, Tokyo. The destinations this airline caters to include European, North American and Asia trading and transportation hub. Some of the cities include Amsterdam, New York City, Chicago, Singapore, Seoul, Shanghai, and Hong Kong to name a few. It is in codeshare agreement with Singapore Airlines Cargo and it is a major cargo airline in East Asia.

Japan is a country made of islands in Asia and has become a major global economy and is a trading hub in this region. Japan trades in different goods and services and many goods are imported and exported by air with the help of cargo airlines like NCA Nippon Cargo Airlines. This was the first cargo airline in Japan and is at the forefront of air cargo in Japan. This airline also provides ground support to the Japanese Air Force.

This airline offers different types of cargo services to customers. Cargo is a term used for different types of goods that are transported from one airport to another. This includes moving cargo within the country as well as to and from international destinations. This includes thermo shipments which are temperature-controlled and also extremely large cargo shipments. This airline is experienced in handling super-high quality and sensitive cargo from one place to another. There are special arrangements in place to transport artwork or rare precious items from one place to another. There is a list of embargo items available on the website for customers to understand what can and cannot be shipped with this airline.

Many times people make shipments by air as it is essential to move shipment or cargo fast from one place to another. The airline also has an NCA Express option where customers can use the airline to make express delivery of goods or shipment from one place to another. There is all information available online about types of items that can be shipped with this cargo airline.

Customers that use this cargo airline can track their shipment on the company’s website. The airline gives its customers details about the shipment like an AirWay Bill number which they can use to track the cargo on the website. Details about the scheduled cargo flights are also available on the website where customers can book space on the cargo airline for their shipment. 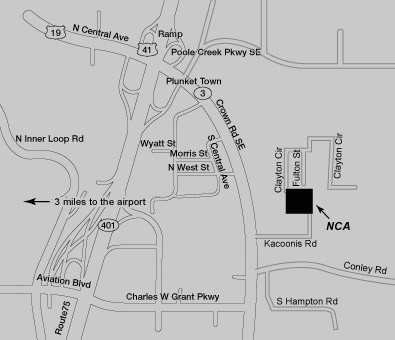