Montenegro Airlines are the flagship carrier of Montenegro that is headquartered in Podgorica. It operates chartered and scheduled services throughout Europe from its hub that is at Podgorica airport. It also has a second base that is maintained at Tivat airport. As of June 2019, it is the only Montenegro airline that offers regularly scheduled services. It has a fleet size of 6 aircraft and has routes to over 15 destinations.  It is owned by the government of the Federal Republic of Yugoslavia.  You can check out more of the deals, discounts, sales and offers by the company at their official website.

The Montenegro airlines have a fleet of six modern aircraft right now of which three are of the Embraer 195 types and two Fokker 100 types.  It operates scheduled and chartered services throughout Europe and is also a member of the International air transport Association.  You can book tickets and charter flights to Italian destinations using this airline.

This airline was founded by the government of the Federal Republic of Yugoslavia on October 24, 1994. The first aircraft was purchased almost 2 years later back in 1996. And the first commercial flight took place on May 7, 1997, at exactly between Podgorica and Bari Italy at 10:30.On April 2000, the Montenegro airlines became the member of the International air transport Association also known as IATA. The first of the five Fokker 100 aircraft was delivered to the Podgorica Airport.  Amadeus CRS attached itself on March 5, 2003, and on 2000 for Montenegro airline pilots were the first in the region that were granted the IIIA certificates. Then on the same year, this airline also carried its millionth passenger. But Montenegro airlines had to seize international flights from Serbia to other countries because they were not profitable due to the seventh freedom policy. They had to register a separate airline in Serbia call Master Airways so that they could offer flights to that area. But it was denied an operating license because the Siberian government had protectionist policies. With the introduction of first Embriar aircraft, regular flights to London Gatwick were introduced. The airline still remains a government-owned company and enjoys protectionist and financial support from the government. They are now ordering more new aircraft and are expanding their business.

It is an Establishment airline service that is famous throughout Italy and its neighbouring countries. It is the only government-funded airline in Montenegro. It has a fleet of six aircraft and is expanding. If you want to book tickets you can do so at their website. This airline office regularly scheduled routes to all the destinations

This airline can provide additional flights to London and extra flights to st.Peterburg. There are also special programs that help you earn miles if you are a frequent flyer.  You can create a membership under terms and conditions and collect your miles while you travel. You can spend miles to earn other benefits such as silver and gold status. All new users are automatically granted blue status which does not have any benefits. The silver status can give you some benefits such as business class tickets at the price of Y class. You also have priority on the Waiting list. Gold status can give you even more priority such as 10% status miles more on all flights.

Montenegro airlines have several different destinations to which it provides charter flights regularly. Also, schedule flights can be booked on the website. Some destinations include:

There are several more destinations and arrangements can be made to visit more locations via their booking service.

If you are a new user and have a blue status, you can only carry baggage up to 10 to 14kgs. But if you have a gold or silver status, then you can carry up to 32kgs and have more priorities. Hand baggage is also allowed up to 8 kg per person. Other items such as electronic devices, pet transportation, sports equipment,weapons and ammunition can be transported under strict regulation.

Food and beverages can be purchased on the aircraft via cash. There are no complimentary drinks but you can purchase them on the flight. There is also a limit on the amount of alcohol that a person can consume.

You can book tickets for the airline from their website. They also provide services to book hotels and cars for rent.

With frequent flyer programmes, the passengers are also able to take advantage of the miles that they have already flown in Montenegro. 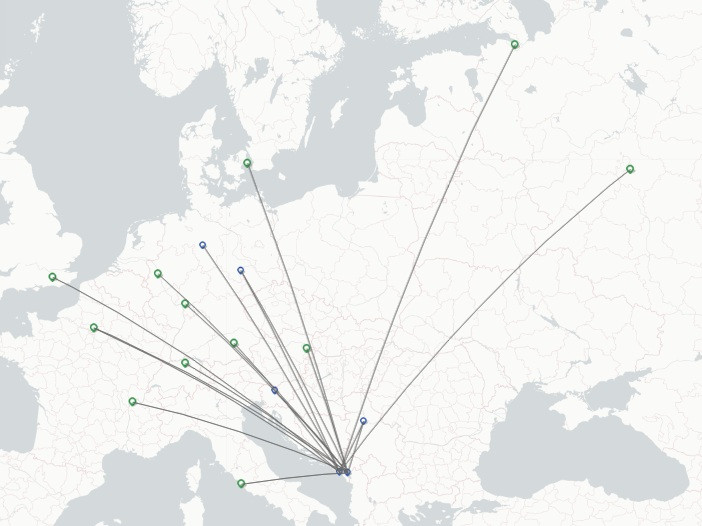