For the best of deals on flight bookings and tickets, you can visit the official website www.maham.aero/en/which is the only authentic website of their lines. You will get all the necessary information on tickets and destinations on the website. The website keeps on updating every day so you will find better and unique deals every day.

The airline which was previously known as the Mahan Air is a privately owned Iranian airline which has its headquarters in Tehran, Iran. The airline has been operating schedule domestics services and international flights to the far East, Middle East, Central Asia and the whole of  Europe. The main home base of the airlines is the Tehran Imam Khomeini International Airport and the  Mehrabad International Airport. The company was founded in 1991 and it began its operation from June 1992.

The airline as a full-service career was established in 1991 and began all its operations in June 1992 as Iran’s first private airline. The airline joint the IATA in 2001 and is owned wholly by Mol-Al-Movahedin Charity Institute. Between 2015 and 2018, the airline significantly expanded all its operations and fleets. The main target was to transfer business between Asia, especially China and European destinations. In 2016, besides Germany and Denmark, the airline started its services to Milan, Athen and later Barcelona in 2017. The airline was operating 15 weekly flights to China until late 2018.

With a fleet size of 37 advanced and updated aircraft and with the company slogan the spirit of excellence, the company connects over 50 destinations in the whole world. The airline has its headquarters at Aryashahr, Tehran, Iran. The Mahan Air was carrying 5.4 million passengers till 2015 with an average load factor of 77% and in the mid of 2015, they had a fleet of 68 crafts which was the largest in Iran based on the number of seats and the feet size. The airline was also operating scheduled passenger services to the international destinations in Europe, far East and the Middle East. As of now, the company works with 4, 719 efficient employees who have been properly trained and groomed.

The Mahan Air has been operating scheduled services in 50 destinations in 18 countries between Asia and Europe. Recently in 2019, the airline has developed a route to South America too. The most popular destinations served by the airlines are Shanghai, Shenzhen, Almaty and Milan.

For more details on the destinations and hibs, you can surf through Google or visit the official website which has been mentioned above.

Like some of the other airlines, the Mahan Air provides all its passengers with some special features.

Like all the other airlines, the Mahan Air has specific Baggage rules which all the passengers need to follow.

Any item of the passenger's baggage with measurement is always greater than the specified one will be handled out as out of Gauge baggage and will require more time to pass through all the airport security baggage process.

The Mahan Air provides complimentary food and beverage along with the ticket. The type of food and drink will vary according to the passenger's seating.

The food will vary from simple snacks to hot and Cold meals which have been cooked exclusively in the floor space. The centre has recently been awarded the  HACCP certificate which is another indicator of the high quality of the food that is served.

The airline also allows the production of special meals on the request of the passengers. The passengers will have to pay and inform the authorities 48 hours before departure.

You can always visit the official website which has mentioned above or books the tickets from any other website that allows flight ticket reservation.

If you are looking to make Mahan Air reservations visit our website airlinesmap.com or can book with direct Mahan Air official website http://www.mahan.aero/ You may call our toll free number 888-220-0490 or direct Mahan Air number +98 21 4838 4838. Get more information about Mahan Air Reservations and Flights Tickets to click below.

Visit Mahan Air site for web check-in http://www.mahan.aero/ and navigate to manage to bookings. You may have the option of online Mahan Air Web check-in and boarding pass if still, you are facing any problem please call +98 21 4838 4838.

It's very easy to claim Mahan Air cancellation and Mahan Air refund call direct phone number of +98 21 4838 4838 or visit official site http://www.mahan.aero/ manage bookings. You may have the option to refund or cancellation. 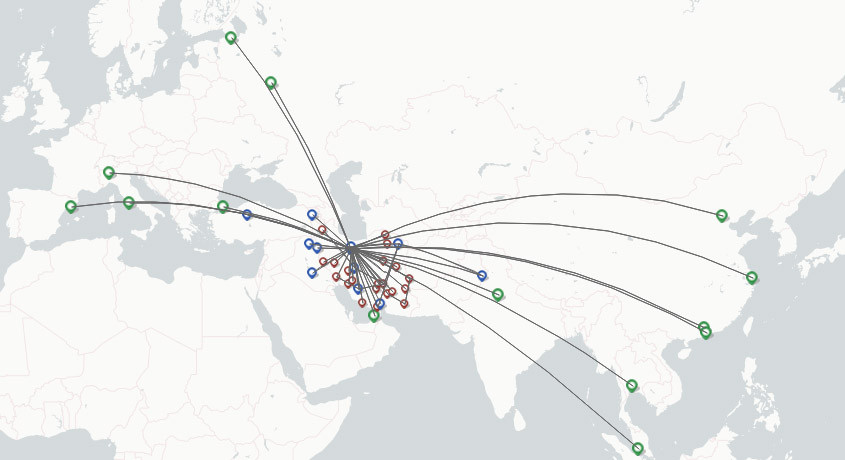