Are you one of those people who need to fly a lot? Or are you looking for a reliable airline to fly to China? If you are then I urge you to go for Lucky Airlines. Visit www.luckyair.net for further information and details.

Lucky Air is a low-cost flag bearing carrier of China. This airline is based in Kunming, Yunnan in China. This airline is a fairly new airline and it has not been long since it started its operations. This airline first started providing flight services between Dali and Kunming and Xishuangbanna and Kunming. They soon expanded their flight services to various other destinations in China and different added international routes and destinations as well. Lucky Air has its base in Kunming Chingshui International Airport. This airline has made a lot of progress since its establishment. This airline is also one of the four members who came together to establish the U-FLY Alliance. It has provided top-notch services to its passengers since day 1. They have now become one of the most trusted airlines in China.

Lucky Air was first established in July 2004. This airline was first started as a start-up airline which was known as Shilin Airlines. Hanan Airlines, which is another reputable airline, invested 2.93 million yuan and provided 3 Dornier aircraft to the new company. Shanxi Airlines which is affiliated to Hanan Airlines also invested 47.07 million yuan and provided the airline with a Boeing and a de Havilland Dash 8 aircraft. Just like Shanxi, Yunnan Shilin Tourism Aviation Co. also invested 1 million yuan. Shilin Airlines was then renamed with the name Lucky Air on the 23rd of December, 2005. On 26th February 2006, Lucky Air started its first flight operations with a flight between Kunming and Dali within Yunnan.

Lucky Air has various aircraft in its fleet. It has all the best and modern aircrafts. It keeps its fleet updated all the time. Lucky Air has a total of 57 working aircraft in its fleet. It has three Airbus A319-100, eight Airbus A320-200, twelve Boeing 737-700, twenty-one 737-800 and various other aircraft as of July 2019. It has also ordered one Boeing 737 Max-8. The delivery for this pre-ordered Boeing is suspended due to the crash of ET-302. It keeps its fleet of aircraft well maintained at all times.

Since its establishment, Lucky Air has expanded its network very quickly and with ease. It covers various destinations all across the globe. It tries to provide its flight to as many passengers as possible. As of 2019, it covers a total of 51 domestic cities, 2 regional cities, and 12 international cities. These destinations include Sihanoukville in Cambodia, Beijing, Dali and various other cities in China, Osaka in Japan, Manila in the Philippines, etc. It covers a total of sixty-two destinations. It has its hubs in Kunming Changshui International Airport and secondary hubs in Chengdu Shuangliu International Airport.

The passengers of Lucky Air need to arrive at the airport for check-in at least two hours prior to the departure time of the flight. Since Lucky Air only has one class, it allows all of its passengers to carry a piece of hand baggage which should not exceed the dimensions of 55×35×25cm. Not just that, this airline also allows a free checked baggage allowance of 15kilos. They also allow you to buy extra allowance if your baggage exceeds the given allowance.

Lucky Air provides all of its passengers with the same premium menu. They have a variety of food and beverage options for you to choose from. They believe in hospitality and they make sure that their passengers have a great time on-board. They provide all of their passengers with free food allowance since there is only one class.

The best part about Lucky Air flights is that they are affordable. Due to their cheap rates of tickets, the demand for these flights is high. As a result, they have a 24-hour open website which allows you to book your flights any time you want to. Not just online tickets, they also have tickets counters from where you can go and get your tickets.

Unlike all the other airlines, Lucky Air only has one class known as Economy Class. The price of the tickets is relatively less and can be afforded by any person.

If you are looking to make Lucky Air reservations visit our website airlinesmap.com or can book with direct Lucky Air official website http://www.luckyair.net/ You may call our toll free number 888-220-0490 or direct Lucky Air number +86 871 809 8538. Get more information about Lucky Air Reservations and Flights Tickets to click below.

Visit Lucky Air site for web check-in http://www.luckyair.net/ and navigate to manage to bookings. You may have the option of online Lucky Air Web check-in and boarding pass if still, you are facing any problem please call +86 871 809 8538.

It's very easy to claim Lucky Air cancellation and Lucky Air refund call direct phone number of +86 871 809 8538 or visit official site http://www.luckyair.net/ manage bookings. You may have the option to refund or cancellation. 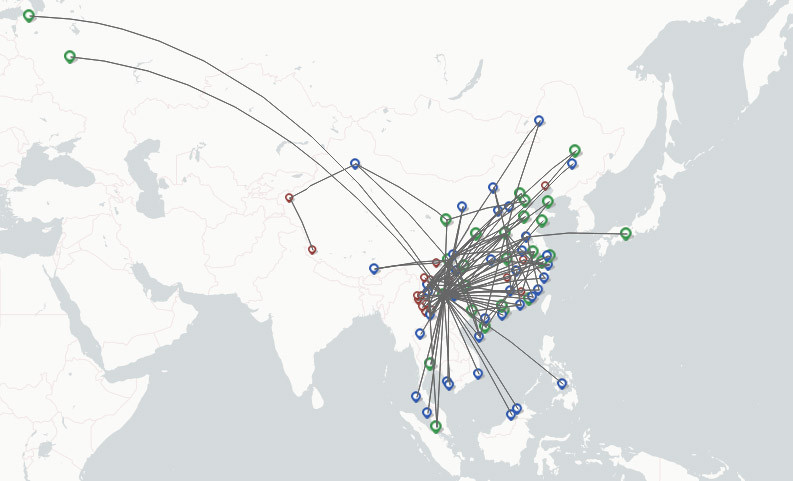