This cargo was previously known as TAM Cargo and ABS cargo Airlines. This Cargo airlines as its base in Brazil. This ahs scheduled services within Latin American and between Brazil and the USA. This also operates charter services. The main base of the cargo is the International Airport. If you wish to see all the details about the cargo, its services and the charges then you can log on to the https://www.latamcargo.com/

Not just the goods but the cargo is also into the transportation of some pet animals. They transport the animals through domestic as well as international routes. The airlines aim at following the best standards of the care so that the pets will each to their desired place in good conditions. The cargo flights are designed to give safety to the animals, and this is in accordance with the ATA rules and regulations. They make sure the box through which the animals are being transported is good and there is label on that. They will also make that sure there is enough food and water inside and the necessary formalities are done for their transport.

This airlines were started its operations officially in June 1995 as the Brasil Transair - Transportes Charter Turismo. In November 2001 the Lan Airlines got an important stake in the company. This is owned by LAN airlines and some other companies too. Since July 2012 it started as the TAM cargo. After the merger of the TAM Airlines by Lan Airlines to start LATAM Airlines Group.In 2016, it has again been renamed from TAM cargo to its current name that is LATAM cargo Brasil.

This is cargo service that is offered to many places worldwide. The company is dedicated to give the best quality services at the fair rates to people. They not only transport the goods, valuables, documents but they transport your pets with care too. They also help you with the documentation that as to be done for the cargo.

This is one of the best cargo airlines group in South America that gives air cargo services t more than 140 places across 29 countries.

This is the air fright brand of LATAM Airlines Group that is established on 5 April 2016. The entity presents the cargo operations of the LAN cargo, TAM cargo an LAN cargo. The air freight brand is a section of the identity consolidation process by the LATAM Airline Group. LATAM Cargo is the biggest cargo airline group placed in South America, that gives its best quality cargo services to more than 140 hubs in total 29 countries.

You can make online booking in advance through the official portal of the cargo services. This is the way you will be able to save your time. If you want to make the booking, then you can do that through https://www.latamcargo.com/ 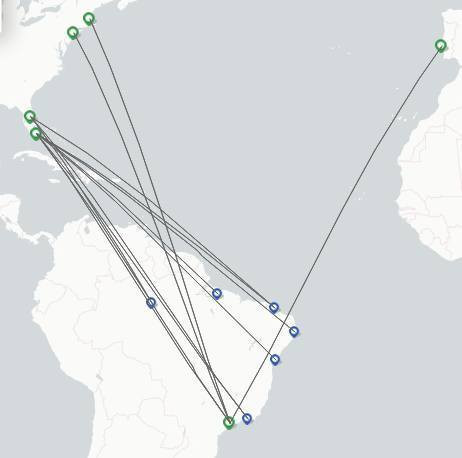