Jeju Airlines belongs to South Korea, the largest and the cheapest airlines. It is the first of its kind in South Korea. The airlines run domestic services between many cities of South Korea. Airlines offer international services to many South-East Asian Countries like China, Japan, the Mariana Islands, Russia. Airlines is also part of Value Alliance. The Airlines is named after Jeju Islands.

The Airlines was a joint venture between Aekyung Group and Jeju Islands Government, the operations began on 25th January 2005, The Airlines became a part of Value Alliance in the year 2016. The airlines are also the World's first Pan-Regional Low-Cost Carrier Alliance (LCC). The LCC includes eight Asia-Pacific Low-Cost Carriers.

Jeju Airlines company slogan is " New Standard, Jeju Air". The airlines have about 2700 employees. The Fleet size of the airlines is 45. Airlines is a part of Aekyung Group, thus making Aekyung Group a parent company. The headquarters of the Airlines is Jeju City, Jeju Province. The Chief Executive Officer is Chan An and the Chief Operations Officer is Seok Joo Lee. The reported revenue of Airlines is around 890 million dollars and Profit generations are 80 million Dollars.

The Airlines has a Frequent-Flyer Program called Refresh Point. The Airlines provides luxurious travelling options to its business class passengers without losing insight on its budgeted passengers. The Airline's fleet consists of 20 Boeing 737-800 planes. The Airlines offers in-flight Duty-Free shopping facility with a pre-order facility to pay either online or via mobile.

The Airlines Domestic Aircrafts policy charges passengers 1.86 dollars/kg if the weight of the luggage is more than 20kgs. If the passenger is holding hand carrying luggage, then the weight drops down to 15kgs. The infants have no free baggage. The dimension of all three-sides of the luggage should be 203cms.

In the case of International Aircrafts, passengers can carry up to two luggage with less than 23kgs limit. In the case of hand-carry luggage, the passenger can only carry one piece of luggage. In case of infants is 10kgs weight limit. Airlines have a policy of Portable baby cart and wheelchair carrying facilities. The Airlines also has a strict policy against battery and motorized wheelchairs under the Airlines Regulations for transportation.

Food: In the case of domestic flights there is no free food or food products. Of course, you can order the book from pre-order services available on the website. In the case of international flights also the passengers have to order food, a minimum of 4 days before departure. The airlines have a full-fledged menu on its website available for their passengers.

Beverages: Airlines has Air Café services that let you pre-order your food and beverages. However, Airlines suggests the customer can buy soft-drinks and beer inside the aircraft. Airlines serve alcoholic beverages.

Special Meals: The Airlines has a policy against allergy suffers, however no separate special meal menu is available.

You can book the tickets to the Airlines at the official website and the website is available in English. The airlines also suggest that passengers may book their tickets under Private Tourism Corporations and Booking Agents.

The Airlines has no separate classes however, the airlines suggest that the passengers could book the front row seats at the earliest, which are available at a higher price to experience best-in-class legroom and suggests customer to pre-order meals and beverages to avail all the facilities the Airlines has to offer. Jeju Air has the Business class facility available for Singapore Route and its planning on implementing the same facilities from Busan to Guam and Saipan routes, due the travel time of four hours. The Airlines now has Lounge Facility only at Incheon for a price of 21 dollars.

If you are looking to make Jeju Air reservations visit our website airlinesmap.com or can book with direct Jeju Air official website http://www.jejuair.net/ You may call our toll free number 888-220-0490 or direct Jeju Air number +82 1599 1500. Get more information about Jeju Airlines Reservations and Flights Tickets to click below.

Find the latest updated Jeju Air baggage policy at Jeju Airlines baggage policy and allowance or you can visit the official website of the Jeju Air's baggage page http://www.jejuair.net/ . You may call +82 1599 1500 for baggage rules.

Visit Jeju Air site for web check-in http://www.jejuair.net/ and navigate to manage to bookings. You may have the option of online Jeju Airlines Web check-in and boarding pass if still, you are facing any problem please call +82 1599 1500.

It's very easy to claim Jeju Air cancellation and Jeju Air refund call direct phone number of +82 1599 1500 or visit official site http://www.jejuair.net/ manage bookings. You may have the option to refund or cancellation. 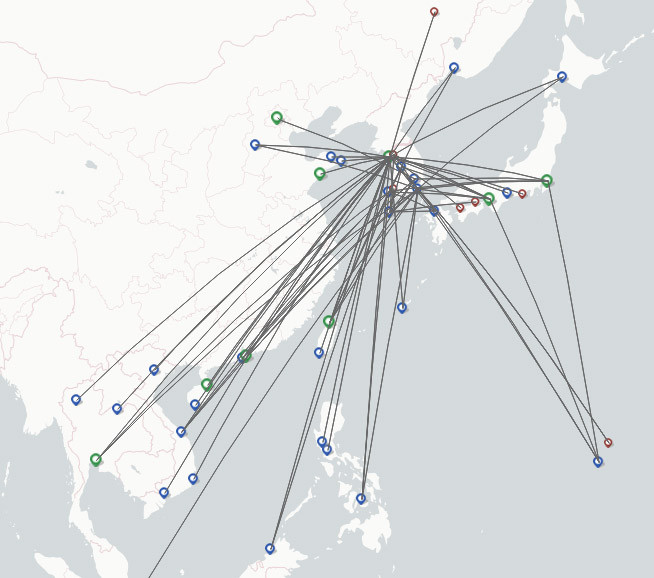