Iran Aseman Airline is the third-largest Airlines from Iran. The Airlines operates from Tehran and it flies both Domestic and International. The official website of Aseman Airlines is  www.iaa

The third-largest from Iran and the Airlines commenced its operations in 1980. The Airlines is owned by Iranian Civil Pension Fund Investment Group. The airlines are privatized airlines with 4000 employees, owns 37 aircraft and covers over 55 destinations.

Airlines was founded in the year 1970, over 49 years ago as Air Taxi. Later in 1980 named its name to Iran Aseman Airlines. The Slogan of the Airlines is “ We guarantee your safety in the sky”. Airlines have suffered major accidents over the years. On 4th October 1990, Aseman Aircraft overran on its landing and fell upon concrete wall 100 metres behind the runway of Ramsar Airport. No Casualties. Later on 12th October 1994, Aircraft from Isfahan to Tehran decanted uncontrollably near Natanz due to loss of power in both its engine, killing over 59 passengers and 7 crew members. On 18th July 2000 due to the low visibility the Pilot missed the runway at Ahwaz Airport and landed next to the runway, no casualties reported. Enroute Aircraft from Tehran to Tabriz overran the runway, instead landed in the canal. Reporting 2 injured passengers, among 103 passengers and all the seven crew members were safe. On May 10th 2014 Aircraft from the Airlines was reported to be damaged due to the left-hand main undercarriage. The Airlines reported crash flying over when the aircraft was flying from Tehran to Yasuj, into the Zagros Mountains located south to  Isfahan. The reported death of all the passengers and crew members.

The International Destinations from Iran Aseman Airlines are as follows

The Hubs of Airlines are

The Airlines has major tie-ups with most of the travel and hotel search websites, so its very easy for the passenger to avail high discounts on the Iran Aseman Airlines.

The Airlines offers free baggage allowance on regular tickets. The passenger is allowed only one piece of baggage, and the maximum limit of the baggage should not exceed 20kgs.

IranAseman Food: Airlines provides a wide range of meal as per its intern menu that is changed every day.

IranAseman Beverages:  No alcohol is served on the airlines.

Iran Aseman Special Meals: The airlines have no information on this category.

It is advisable to book Iran Aseman Airlines via another trip, hotel and airlines website because of multiple deals. The official website is available only in Persian.

There are two main categories or classes of travel namely:

2. First Class –The Airlines does provide luxuries meals, better legroom and some inflight entertainment for its first-class passengers. 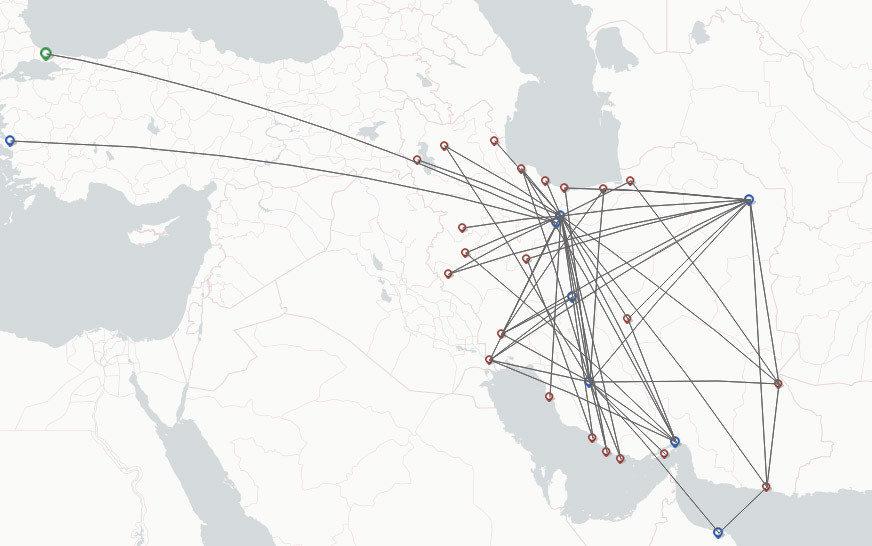