Iran Air is the official airlines of Iran. The official website of Iran Air is https://www.iranair.de/. The website has many great deals and it also claims Adineh Travel GbR is the official ticket selling for Iran Air in Germany and also advice to visit their website for more deals on Iran Air.

The Airlines of the Islamic Republic of Iran is the official name of Iran Air. The official website of the Airlines claims, that one of the oldest Airlines in the Middle East. Airlines is one of the most reliable airlines in the Middle East and are best known for their affordable holiday packages and their wide networking, partnership with other agency to provide best of comfort. Iran Air specialises in flying thousands and thousands of passengers from World-Over to the holy city of Jeddah in Iran, as a part of Hajj Charter Operations, this service was on hold during 2016, due to the tension between Saudi Arabia and Iran. However, this service was resumed in 2017.

In May of 1944, Reza Afshar and Gholam Ebtehaj started Iranian Airways, the airlines flew its first passenger aircraft from Tehran to Mashhad. The airlines also established its routes thereafter from  Tehran to Esfahan, Shiraz, Bushehr, Abadan and Ahwaz. Expanding its routes to Cario, Baghdad and Tel Aviv in the year 1946 and then to Paris on April 1947. Airlines became one of the domestic airlines in the Middle East to fly International Routes to Europe, every week. The Airlines initially had a fleet of Douglas DC-3s Aircrafts and they switched over to Vickers Viscount Aircrafts. The Airlines was nationalised in the year 1961 and soon after merged with a privately owned Airlines called Persian Air Services has majored its operations in freight services. Persian Air Services was established in the year 1954 and by 1960 the airlines flew passengers to major European Destination like Gevena, Paris, Brussels and London. On 24th February 1962, Persian Air Services and Iranian Airways merged to form Iran National Airlines Corporation (HOMA) also called Iran Air. The Airline uses HOMA Bird as its logo.

The Airlines CEO is Farzaneh Sharafbafi and the revenue of the Airlines annually is estimated to be 329.74 million dollars. The Airlines had Arvo Yorks, Douglas DC-3s, Douglas DC-6s and Vickers Viscounts when the Airlines became Public and merged with Persian Air Services. However, after 1964, the Airlines became a member of the International Air Transport Association (IATA) and bought its first Boeing 747SP. The Fleet size is 35 aircrafts that include Airbus A300B2-200, AirBus A300B2-200F , Airbus A310-200, Airbus A340-200 and Boeing 707-300, 727-100,727-200/Adv,737-200, 747-100B,747-100SF,747-200M,747-400 and 747SP. The Iran Air has three subsidiaries  IranAir Cargo that specializes in carrying Freight and Goods, Iran AirTour a low-cost airlines started its operations in the year 1990 and now provides service of flying the passengers to NorthEastern Iranian City of Mashhad and Imam Reza Shrine , and the last one of the lot is Homa Hotel Group, a hotel chain located in Tehran, Shiraz, BandarAbbas and Mashhad.

The Airlines has a logo of Homa Bird a mythological creature Griffin. In Persian Mythology its symbolizes Happiness and the Airlines want their Passengers to be Happy when they fly with Iran Air. The logo was designed by Edward Zohrabian. The Gryphon has Eagle's head, Cow's ears, Horse's mane bringing in three distinct characters and the Griffin has no legs indicating that the creature never rests and is always flying sky high, above the earth and not stopping. The Airline also follows the code of Hijab, the airlines insists all female passengers including the crew to cover their hair and head with the headscarf and also has a strong policy that insists female passengers to cover their body. Although this rule is mandatory in Domestic Aircraft, it is not enforced on International flights for the passengers onboard. The Airlines has a codesharing agreement with Aeroflot, Austrian Airlines, Azerbaijan Airlines, Lufthansa and Turkish Airlines.

This Policy has an exception to the Passengers from USA and Canada has a baggage limit of 23kgs.

Passengers from Class C are allowed hand baggage of 7Kgs

Passengers from Class Y are allowed hand baggage of 5Kgs.

The Airlines follows a Policy of charging on Excess Baggage as per the geographical location and zones. More information is available on the website.

Iran Air has a restricted policy of food and beverages served on its Airlines.

IranAir Food:  The Airlines has a strict Islamic Meal policy, that strict serving pork and sausages on board. You can only choose Halal Meals since Airlines has no choice for Non-Halal Meals.

Ryanair Beverages: It is only the very few airlines that don't serve alcohol on-board and the beverages menu is restricted to serving Zamzam Cola ( Iran-Produced Soft Drink)

IranAir Special Meals: The website has no mention of a special meal.

You can book flights for IranAir, via their official website or you may just google IranAir, you can find many third party websites that offer to book tickets for IranAir. The website of IranAir does suggest Adineh Travel the official tour operator of Iran, for more information visit www.AdinehTravel.de

If you are looking to make Iran Air reservations visit our website airlinesmap.com or can book with direct Iran Air official website http://www.iranair.com/ You may call our toll free number 888-220-0490 or direct Iran Air number +98 21 4662 4420. Get more information about Iran Air Reservations and Flights Tickets to click below.

Visit Iran Air site for web check-in http://www.iranair.com/ and navigate to manage to bookings. You may have the option of online Iran Air Web check-in and boarding pass if still, you are facing any problem please call +98 21 4662 4420.

It's very easy to claim Iran Air cancellation and Iran Air refund call direct phone number of +98 21 4662 4420 or visit official site http://www.iranair.com/ manage bookings. You may have the option to refund or cancellation. 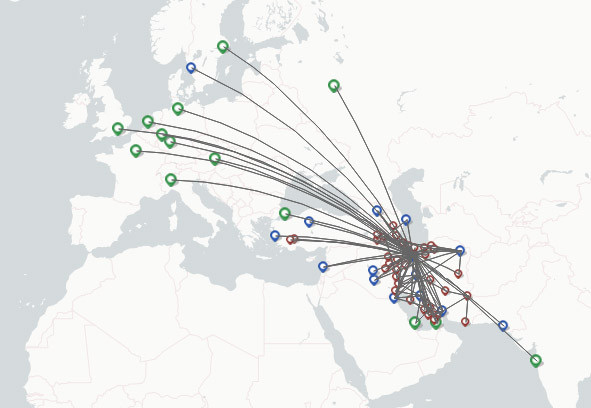