Iberia was founded in the year 1927 and carry its operations as a carrier of Spain. It has its base location in Madrid but provides the carrier services to international destinations as well. The base of it is situated in Madrid-Barajas Airport. It has two divisions in the type of carrier owned, they are basically Iberia regional and Iberia Express. It is involved in a lot of other activities apart from providing carrier and cargo services. The other activities include- aircraft maintenance, in-flight catering services etc.

Founded in the year 1927, this airline is playing its role for 92 years. The fleet size is of 87 aircraft. It has a sweet tagline, mostly different from other airlines who are into this service as well. It goes " And tomorrow, can you imagine?". A bit attractive and the catchy tagline is what it owns. It has an official website registered as - ​www.iberia.com​.

In the year 2010, it was officially announced that British Airways will be merged along with Iberia and they further planned to carry out the operations together aiming to be the third-largest commercial airline by revenue. In November, the same year the deal was approved, and they started their combined operations from 2011. The operations are carried out by them, under their respective names. In the year 2012, it also introduced its low-cost airline and named it Iberia Express serving short and medium routes.

Iberia is basically a full-service airline of Spain. Also a member of one world alliance, it is also believed to be present in codeshare agreements with almost 15 other airlines. It carries its operations serving two main classes in its fleet namely- Business class and Economy class. It also has a subsidiary airline operating in the name of Iberia Express which began to provide the carrier services in 2012. Good customer experience is all they seek and gives the highest priority to such things. They believe the saying “Everyday is the first day” and carry all their operations accordingly. This is the main reason that they are recognised as the most punctual airline in the world. They are rated as a 4-star airline from Skytrax.

Serving an average of 89 destinations in total. Domestic and International both are included in its services. It is known as the leading carrier in-between Europe and Latin America. Another route covered is from North America to Madrid. It also connects some of the popular cities of Europe such as London, Paris, etc. It serves 26 domestic destinations as well as 63 International ones.

Apart from providing cheap flight services, it has a number of services that are taken into consideration by themselves. They provide in-flight catering services that are prepared by some great in-house chefs of this Airline. It covers almost all the main destinations in cheap rates. It also has freight services as well if you want to avail them.

The maximum weight allowed by the airline can be considered as 23 kgs. The luggage carried by the passengers must not exceed this weight in general. The maximum dimension that can be possessed by the luggage should be 158 cms. However, the bar may vary according to the different type of ticket purchased for travelling.  A personal item and a standard carry bag is free for all, and people travelling from business plus long hours of flight can carry two luggages. Business Plus classes allow upto 3 checked bags that can be carried by a single passenger.

Cold breakfast is served for long haul morning flights, short or medium haul flights have food services available but they are charged separately if availed. Meals depend on the time of flight. Alcoholic and Non-Alcoholic drinks are available as well. Different menus are set with different packages for long haul flights. The choice of food is served according to the seat availed.

They allow easy hassle free bookings from their website, you can book tickets for both the parent company and the subsidiary company. Iberia Express is a low cost airline and you can book cheap flights. Bookings can be done from other places as well. Choose your destination, date of journey, preferred time, etc. The details of the available seats and the flight will be displayed on your screen and make a choice accordingly. They also have a booking management centre from where you can easily manage cancellation of your tickets, baggage etc.

They have business and economy class available.

If you are looking to make Iberia reservations visit our website airlinesmap.com or can book with direct Iberia official website http://www.iberia.com/ You may call our toll free number 888-220-0490 or direct Iberia number +34 901 111 342. Get more information about Iberia Reservations and Flights Tickets to click below.

Visit Iberia site for web check-in http://www.iberia.com/ and navigate to manage to bookings. You may have the option of online Iberia Web check-in and boarding pass if still, you are facing any problem please call +34 901 111 342.

It's very easy to claim Iberia cancellation and Iberia refund call direct phone number of +34 901 111 342 or visit official site http://www.iberia.com/ manage bookings. You may have the option to refund or cancellation. 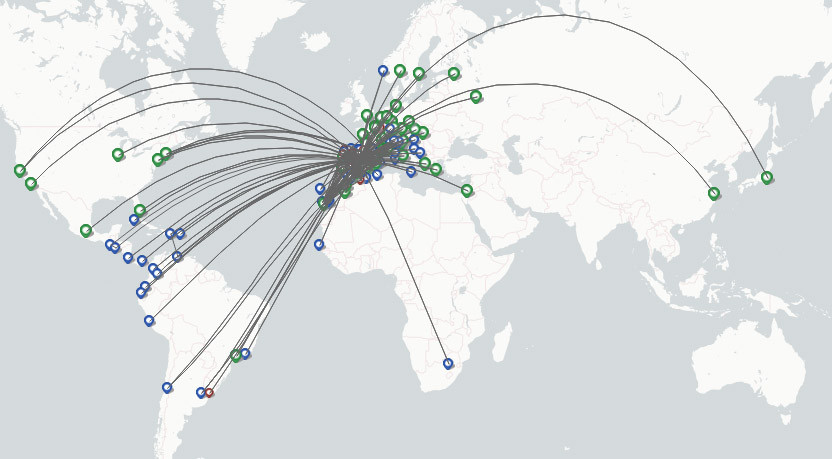