The passenger can access the official website https://www.voegol.com.br/en, to book seats of the airlines. The best deals and other services are mentioned on the website. You can also view the website in various languages, relating to the country of your origin.

GOL Linhas Aereas Inteligentes S.A is a South American Airlines, from Brazil. The other name for Airlines is VRG Linhas Aereas S.A. Airlines has a reputation of being the low-cost Airlines, thus preferred by most travellers. Preferred by the GOL Airlines, the survey report by the National Civil Aviation Agency of Brazil (NCAA), the Airlines has had 9% international market share and 35.7% domestic share.

The Airlines was founded in the year 2000 and began its operations on 15th of January 2001. The first route of the Airlines was Brasilia, Brasilia International Airport to Sao Paulo, Congonhas Airport. The name of the Airlines is associated with football's English word ‘Goal'. The name is a combination of Brazilian, Spanish and Portuguese.

GOL stands for low-cost air-transport with its headquarters at Rio-De-Janeiro in Brazil. The other hubs of the Airlines are as follows Brasilia, Guarulhos and Congonhas in Sao Paulo and  PintoMartins in Fortaleza. The Airlines flies over to 94 destinations with prime focus on the following cities Curitiba, Confins in Belo Horizonte, Salvador, Manaus, Vitoria, Recife in Gilberto Freyre, Porto Alegre and Santos Dumont in Rio De Janerio.

GOL Airlines has its app, that operates based on the geographical location of the user and determines the estimated time to reach the airport. Besides this, the Airlines has Miles Programme called Smiles. The Airlines owns 4 Special Flights that paid tribute to Many famous artists including the Brazilian Soccer Team and the Rock stars of Rio De Janerio Festival. The aircraft have In-Seat power, that provides the facility to recharge your electronic devices during the flight. 69% of the Aircraft has USB Portals and 15% have universal power outlets.  The aircraft also has the best in class in-flight entertainment system, that is available in 77% of their fleet. The 100% fleet of GOL Airlines has sky interior, a lighting system that stimulates dawn, dusk and blue skylines.

The Airlines policy on Carry-On Baggage is as follows, the luggage should fit into the overhead cabins or underneath the seat in the front of the Passengers Seat. The dimensions of the Carry-On Baggage is 115cms in length, width and height and weight with a limit up to 10kgs or 22lbs. The Airlines also provides the Passengers to carry another personal item apart from this like Purse/Briefcase,/Diaper bag /Camera Bag/ laptop bag or an item of similar size in dimensions.

The Airlines has an allowance for special items like Child Stroller, Child Restraint Seats, Wheel Chairs or crutches.

The check-in baggage should not exceed 45kgs/99lbs on Domestic Flight and On International Flights its 32kgs/71lbs. In case the passenger needs to bring in more luggage, then the following charges are to paid by the Airlines

First Luggage cost is estimated at around USD 30 via check-in counters and $15USD via online channels.

Two Luggage Bags is estimated to be USD 70 via check-in counter and $35USD via online channels.

Three Luggage Bags is estimated to be USD 100 via check-in counter and USD 50 via online channels.

The Airline offers passengers a limit of 200kgs/441lbs of excess baggage. In case the aircraft that you are currently flying can't carry all your luggage. The Airlines ensure your luggage will be transported via the Next Flight.

Food: Airlines has two separate policy under Food Allowances. When the passenger is flying Domestic Flight, the passenger will be served Mae Terra Snacks on board and additional food products and snacks have to be purchased from the Airlines. In the case of International Flight, the snacks and meals are all complimentary, the meals also include vegetarian meal options. The website also states a passenger could Pre-Order the meals during booking of the ticket for Domestic Flight.

Beverages:  The complimentary beverages for Domestic Flight includes Coca-Cola, Coca-Cola Zero, Coffee and Mineral Water. You can purchase the following beverages on the aircraft Toddynho Chocolate Milk, Cappuccino, Heineken Beer and Wine. On the international flight, the passenger is provided with alcoholic and non-alcoholic beverages.

Special Meal: The Airline offers Vegetarian Meals and Drinks as an option to its Passengers.

There are two Classes of flying on GOL Airlines: 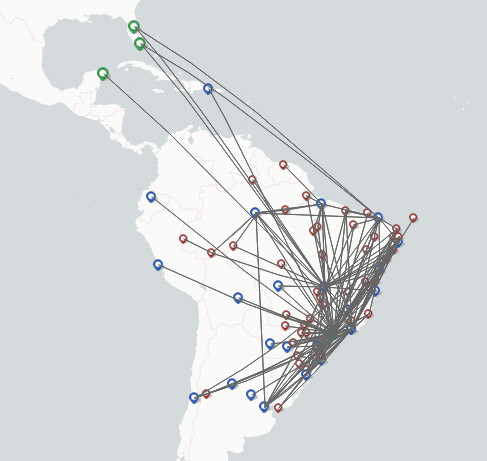