EgyptAir Airlines is known as the flag carrier of Egypt. On June 7, 1932, this airline was called Misr airlines. Its headquarter is in Cairo International Airport, and it flies over 75 destinations including the Middle East, Europe, Africa, Asia, and America.

The idea of starting an airline was proposed by Alan Muntz, the chairman of Airwork, in 1931. It was then named as Misr and on the 31st of December 1931, the company was granted the permission of operating air transport system in Egypt by the government. The headquarters of EgyptAir (earlier known as Misr Airwork) is in Almaaz Aerodrome, Heliopolis, Cairo. Asyut and Luxor, two Aswan flight had its inauguration in late 1934. Another flight from Cairo named Port Said was inaugurated in 1934. It served places like Lydda, Haifa, Palestine, etc. With time progress could be seen and around the year 1935 almost 6900 passengers and 21830 kg of freight were carried over distances of 675,067 km. In April 1939 the fleet had D. H. Dragon, D. H. Dragonfly, D. H. Rapides, D. H.86B all of which flew through the routes of Alexandria-Cairo, Alexandria-Port Said-Cairo-Minia-Assiut, Cairo-Assiut-Luxor-Assuan, Cairo-Lydda-Haifa-Baghdad, and Cairo-Port Said-Lydda-Haifa. In February 1958 the Misrair was called United Arab Airlines.

The company commenced its operation from July 1933 keeping in focus Borg El Arab Airport, Hurghada International Airport, Luxor International Airport, Sharm El-sheik International Airport. The fleet size is 54 aircraft and allied partner is Star Alliance. The airline employed 9000 people in December 2014. The slogan of the company is ‘Enjoy the Sky’ and the parent company is the EgyptAir Holding company. Important people of EgyptAir are Captain Ahmed Adel, Chairman, and CEO of the parent company, Hisham el-Nahas, Chairman, and CEO of EgyptAir. The investment at the beginning was 20,000 in Egyptian currency along with the division of ownership between Misr Bank and Egyptian private investors. Aircraft include Airbus A300B4, Airbus A300-600, Airbus A321-200, Airbus A340-200, Airbus A340-300, ATR 42-500, Boeing 737-500, Boeing 747-100, Douglas DC-8-30, etc.

The members of the cabin crew are trained well enough to handle difficult passengers and aid the senior members, children, and women, disabled people. They take special care of people who suffer from motion sickness, stress, fatigue, etc. The relatively cheaper cost of the tickets with almost the same advantage as other airline makes it the first choice of many citizens. Also, the air hostesses keep repeating the general guideless for every person to follow properly. Thus, EgyptAir Airlines is on its way to making a mark in the top airline companies of the world.

All bags and luggage are checked for each class of service and any baggage exceeding the allowance stated by the guide book will be charged. First-class and Business class passengers can have a maximum of 32 kg baggage with them while the economy class is allowed to have 23 kg of luggage. For infants, the limit is 10 kg per person.

The Egyptian Airline is one of the very few airlines which do not allow alcoholic beverages onboard. It provides healthy and sugar-free meals that are free of beef and beef products. Kosher meals, Seafood and low Cholesterol meals are also provided to a passenger who asks for it. Meals for infants include fruits, vegetables, and meat. For those people who have allergies and cannot eat food from every place, for them, the airline prewarns to carry their food items.

The website (for online bookings) and the reception (for offline bookings) will provide you with all the information you need to experience the best of journeys with the airway. Also, any query will be explained in detail at the counter.

d.The first Class- Booked for celebrities, the staff serving here are highly trained and the standard of everything shoots up to the most.

If you are looking to make EgyptAir reservations visit our website airlinesmap.com or can book with direct EgyptAir official website http://egyptair.com/ You may call our toll free number 888-220-0490 or direct EgyptAir number +202 2696 6798. Get more information about EgyptAir Airline Reservations and Flights Tickets to click below.

Find the latest updated EgyptAir baggage policy at EgyptAir Airline baggage policy and allowance or you can visit the official website of the EgyptAir's baggage page http://egyptair.com/ . You may call +202 2696 6798 for baggage rules.

Visit EgyptAir site for web check-in http://egyptair.com/ and navigate to manage to bookings. You may have the option of online EgyptAir Airline Web check-in and boarding pass if still, you are facing any problem please call +202 2696 6798.

It's very easy to claim EgyptAir cancellation and EgyptAir refund call direct phone number of +202 2696 6798 or visit official site http://egyptair.com/ manage bookings. You may have the option to refund or cancellation. 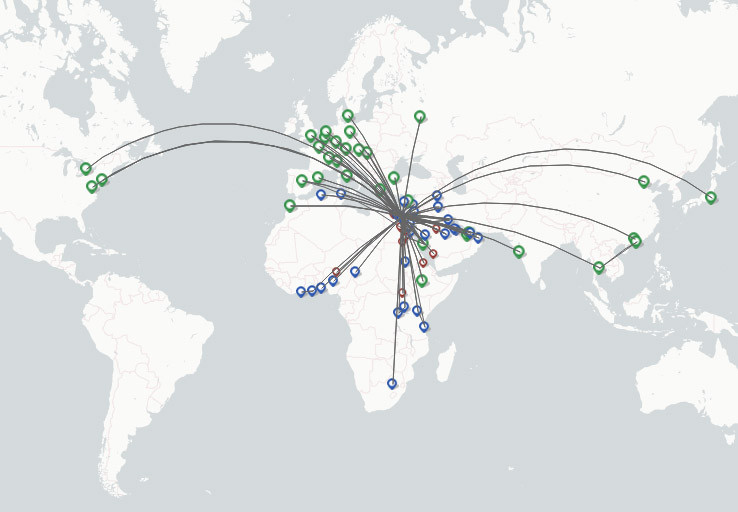