Are you one of those persons who travel a lot? And are you looking for a reliable airline to travel with? If you are then Cubana Airlines is at your rescue. You can also visit the website www.cubana.cu for further pieces of information.

Cubana De Aviacion S.A. is the original name of this airline. Although it is widely known as Cubana. This is the national airline of Cuba which itself is based in Cuba. Cubana is the largest and most trusted airline in Cuba. It was first established in October 1929. This was one of the first airlines to arrive in Latin America. Cubana has its corporate headquarters situated in Havana. Cubana's main base is located at José Martí International Airport. It was originally a subordinate of the Pan American World Airways but then it was taken over by a private company which was run by Cuban investors. Cubana has been owned by the government since 1959. It has been in service for the past 90 years.

Cubana was first established by Clement Melville Keys as Compania Nacional Cubana de Aviacion Curtiss S.A. on the 8th of October 1929. Initially, it was started as a flying school and air shuttle and then it started providing its services in 1930. The name back then had Curtiss in it to show its association with the Curtiss Aircraft Manufacturing company. Previously, Cubana had a fleet of Curtiss Robin, amphibian Sikorsky S-38, Lockheed Electra and Ford Trimotor. After the take over of the Cubana by the Pan American in 1932, Curtiss was removed from its name. By the end of the decade, the carrier added lots of other aircraft to its fleet and became one of the most prominent and renowned airlines.

Cubana handles various types of aircraft that it has in its fleet. It has six Antonov An-158, one ATR 42-500, four Ilyushin Il-96-300, Tupolev Tu-204-100EC, and one Tupolev Tu-204-100. They have also ordered three Ilyushin Il-96-400 which they will add to their fleet. In total, they have 14 working aircraft in their fleet as of August 2017. Cubana also had a very wide range of fleet previously which they changed over the years. They had various top-notch aircraft which they used for their services. Some of these aircraft are Douglas C-54A, Bristol Britannia 318, Antonov An-12, L-1049, etc.

Cubana Airlines provide their flight services to various destinations all over the globe. It works in more than 20 destinations in just Cuba, The Caribbean, Europe, North Central, and South America.

A codeshare is a business agreement that is very common in the aviation industry. In this type of agreements two or more airlines issue and market the same flight under both of their scheduled timelines. Cubana codeshare with a number of airlines. Some of them are Aeroflot, Avianca, Neos, Blue Panorama Airlines, and Air Caraibes.

The main hub for this airline is the José Martí International Airport.

Cubana has a slogan that says “Puerta de Cuba al Mundo” which means Cuba's gateway to the world.

Cubana provides its passengers with the special benefit of easier pet transportation. They have a very reliable cargo which allows them to take care of your pets as well. They transport your pets at a very minimum rate and make sure they are safe and sound on the flight.

They also have their very own in-flight magazine which is provided to the passengers based on their destination. This magazine contains various news and information for you to check out while onboard.

Cubana flights allow one piece of hand baggage which needs to be labeled and not weigh any more than 5kilos. It also should not be of dimensions more than 115cm.

If in case your baggage exceeds the given free weight, you will be charged with 1.5 percent of your fare for every kilogram of your extra baggage. But this rule differs from one destination to another.

They provide a variety of food and beverages on each of their flights. They provide their passengers with welcome cocktails and full free meals based on the destination chosen and the time of the day.

The food and beverages provided on the flight are of amazing quality and taste. They are very hospitable towards their passengers and make sure each and every person enjoys their journey.

Cubana flights can be booked from their official website or from any airplane ticket counter. Their website is at your service 24 hours a day throughout the day which enables its passengers to book flight from anywhere and anytime.

Cubana provided two different types of classes for their passengers.

2.    Tourist Class: This is the Economy Class in Cubana flights. This class gets fewer facilities and allowances as compared to the Tropical Class.

Visit Cubana de Aviacion site for web check-in http://www.cubana.cu/ and navigate to manage to bookings. You may have the option of online Cubana Web check-in and boarding pass if still, you are facing any problem please call +53 7 861 5849. 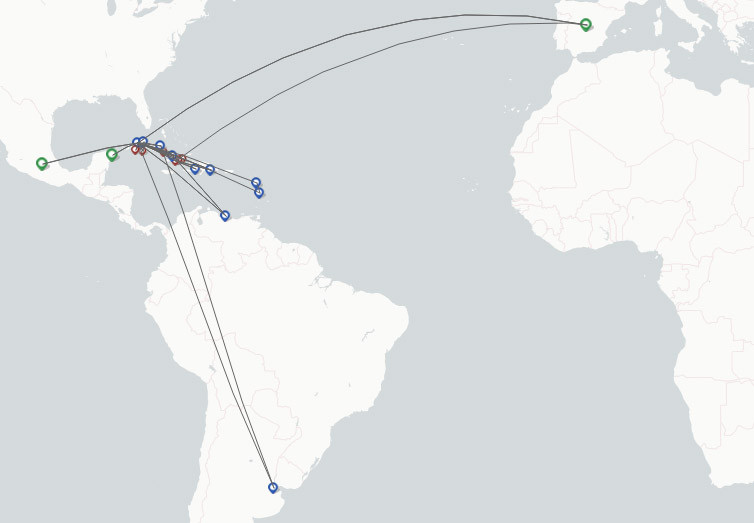