If you are looking to book flights from Croatia then Croatia Airlines should be your first choice. This is the most trusted airline in Croatia. You can also visit the official website http://m.croatiaairlines.com  which is also an authentic page for ticket booking.

Croatia Airlines Limited is the flag bearing airline of Croatia which is owned by the state itself. It has its headquarters in Buzin near Zagreb. It handles both domestic and international flight services mainly to various European destinations. The main hub for Croatia Airlines is Franjo Tudman Airport. Croatia Airlines have become a member of the Star Alliance since November 2004.

This airline was first established on the 20th of August, 1989, twenty-nine years ago as Zagel-Zagreb Airlines. It started its functioning using just a single Cessna 402 aircraft. Zagel then changed its name to Croatia Airlines on the 23rd of July 1990 after the conduction of the first democratic election. Croatia Airlines then got the allowance to lease McDonell Douglas MD-82 because of the agreement that they signed with Adria Airways in 1991. This lease allowed them to start domestic jet services between Zagreb and Split. Soon after, Croatia Airlines obtained three Boeing 737s from Lufthansa which enabled them to become a member of the International Air Transport Association. The airline introduced its first international services from Zagreb to Frankfurt on the 5th of April 1992. Croatia Airlines transported its first one-millionth passenger in 1994. It added two new ATR 42s and two more 737s to its fleet in 1993. Again in 1995, another ATR 42s was brought into the fleet. Since it’s the establishment, the airline has made huge progress and has become one of the most renowned and reliable airlines in the entire world.

Croatia Airlines have three specific focus cities and they are Dubrovnik Airport, Split Airport, and Zadar Airport. This airline has its hub in Zagreb Airport. This airline also has codeshare agreements with various airlines. These airlines include Air Canada, Air France, Air India, Nordica, Lufthansa, Brussels Airlines, Austrian Airlines, and the list goes on. Croatia Airlines presently provides its services to a list of countries. And as of 21st May 2017, this airline provides its services to 27 destinations in 23 countries. These countries include Greece, Spain, Lebanon, India, Austria, Sweden, etc. The airline also has eight domestic flying destinations.

The economy class is allowed to carry one piece of a maximum weight of 8 kgs.

The business class is allowed to carry two pieces each of 8 kg weight.

For Economy Class, they provide one bag allowance of 23kilos and 158cm in dimensions.

For Business Classes they allow two pieces of bags of 23kilos and 158cm in dimensions.

Croatia Airlines offer their passengers various kinds of free food and beverages which vary from one class to another, the duration of the flight and the time chosen for the flight.

For business classes, they serve snacks and meal depending on the time of the flight and the duration. A large selection of drinks is offered to the passengers from where they can choose any drink that they want.

Economy classes, they serve different snacks depending on the flight duration and only on international flights. They also allow their passengers to choose from a variety of beverages.

Croatia Airlines special menu: You can also order a special menu but you have to inform the authorities 24 hours before departure.

Croatia Airlines have their website where you can book your tickets. They also have ticket booking counters that you can visit and buy your ticket anytime you like. These counters and the website both are open 24 hours a day for the comfort of their passengers.

This airline only has two classes and that is the

Visit Croatia Airlines site for web check-in http://www.croatiaairlines.hr/ and navigate to manage to bookings. You may have the option of online Croatia Airlines Web check-in and boarding pass if still, you are facing any problem please call +385 1 667 65 55. 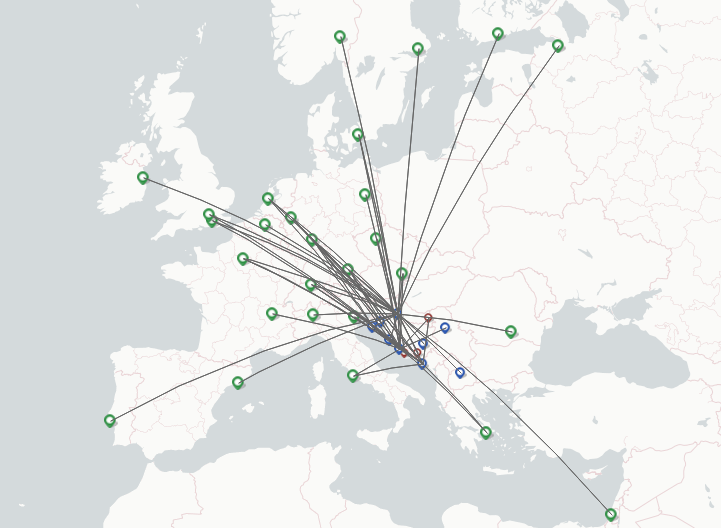