Boliviana de Aviación is also known as BoA, it is an airline based in Bolivia which is owned by the government of the country. The headquarters are situated in Cochabamba and the main hubs are in Viru Viru International Airport. It is one of the largest airlines, it also carries the maximum no. of passengers and has got the maximum fleet size. Their official website is registered as www.boa.bo which contains all the relevant information about the airline.

Boliviana de Aviación started its operations from March 2009 while it was founded in October 2007. Earlier the airline was state-owned in the year 2007, under the presidentship of Evo Morales. Later in the year 2011, the second-largest airline Lloyd Aereo Boliviano stopped its operations after serving its passengers for about 87 years Boliviana de Aviación got a chance to take over and became the largest airline in Bolivia. The airline covers a total of 13 destinations which includes five different countries. The fleet size of the airline is about 20 and covers most of the share of the passengers. The slogan of the company is 'la Nuestra, la de todos' which means 'our airline, the airline of us all'.

The airline was established in the year 2007 by the Bolivian government with a notion to provide air transport services to the people of Bolivia and to serve the country in emergencies. The discontinuation of Lloyd Aereo Boliviano led to unemployment of numerous people when Boliviana de Aviación helped the unemployed people by offering them jobs. The first inaugural flight flew from La Paz, Cochabamba to Santa Cruz de la Sierra which took place on the 29th of March 2009. The airline, when started used to operate with all Boeing aircraft consisting of Boeing 737 and Boeing 767 and later in the year 2012 leased Airbus aircraft.

The airlines serve most of the International flight services and also has plans to expand its service to Lima, Peru as the airline after the inauguration started growing up very fast. Boliviana de Aviación started expanding its services with just three months of existence. It covers almost all the cities of Bolivia and carries the maximum no. of passengers. The first international flight took place on the 14th of May, 2010 which flew from Cochabamba to Buenos Aires and the second International destination was Sao Paulo which took place in November of the same year, 2010.

The airline is fully owned by the government which enables the airline to operate at the time of crisis even and soon it became one of the largest airlines in the country. The airline is generally known as BoA and covers the maximum share of the passengers of the country. After the discontinuation of Lloyd, it allowed numerous employees. The number of employees associated with this airline is huge which allows the airline to provide the best possible services to its passengers at a very reasonable fare price.

Boliviana de Aviación allows its passengers to one piece of luggage as a carry on luggage whose dimension should be 55cm × 25cm × 35cm and should not weigh more than 7 kgs for all the domestic flights and for international flights the same can vary up to 10 kgs for carrying on luggage. Laptop Bags, jacket and purse can be an addition. In the case of checked-in baggage, a passenger can bring luggage which should not weigh more than 20 kgs for domestic flights and in case of international flights the same can be of 23 kgs or 30 kgs.

The food and beverages served during the flight depend upon the duration of the flight and the arrival and departure time according to which the airline serves snacks, beverages and meals. The airline has its inflight menu from which the passengers can select according to their taste and preference.

The different classes in Boliviana de Aviación are Economy and Business class. The difference between the classes is of fare and the options of food and beverages offered. The seat of the Business class is more reclining and comfort than that of the Economy Class.

The baggage allowance also differs among the classes. 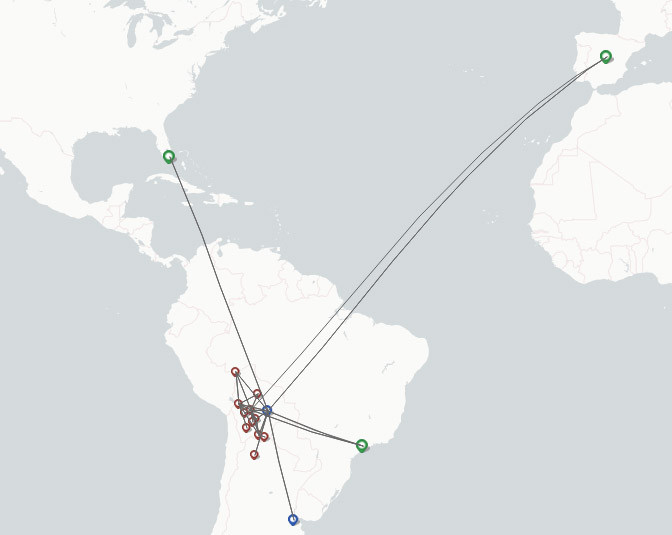