Read the common myths about the solo female travellers that demoralise you as a woman or a girl who wants to go out and to see the world. Fake things do not have a long life, you apply logic,

A comparison of males and females has always been one of the most favourite topics in the human world. The impact of everything on females is scrutinized with utmost interest and concern by the men and the women. Especially when it comes to the solo existence of any female in any situation, the discussion has so much to create curiosity.

Travelling is an exciting and refreshing thing. But on the question of a solo female traveler, even this most exciting activity is filled with myths. There are many courageous souls who, despite being women or girls, want to explore the world on their own. But some foolish and distracting myths can disturb their focus from doing what they want. 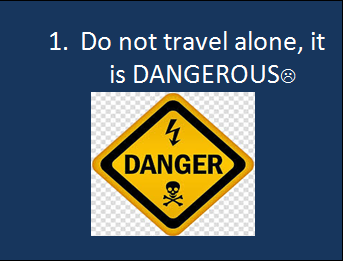 Hello!! Can we grow up instantly to not let such funny myths exist in the travel industry? In the era when humans talk about better connectivity and laudable transportation services through air, water, and roads, where do such things exist?

You know what??? There is a difference. Travelling alone is never unsafe, but yes travelling lonely and isolated can raise a concern.

For example, a young girl visits Switzerland with a massive bunch of people on the flight. No worry!!  She went to her hotel in a taxi from a busy road, Hello??? She is still safe; she did her check-in with the help of the humble staff of the hotel and got into her room SAFELY. The next day she goes out to a tourist destination on a bus with the other tourists or through public transport. Did you see that she is still safe? Following the same route, she can get back with the same security.

The issue arises when you break the rules, leave your group, or take an isolated road without any information. But until you do not break the rules, there is no need to worry about anything. 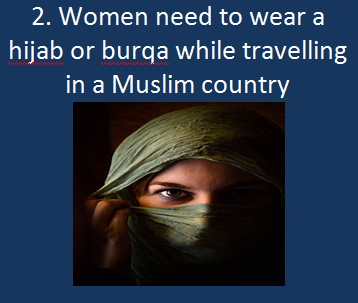 As a solo women traveller, it may raise a concern two questions in your mind, and both are sufficient to create anxiety.

1) Will I have to wear it for the whole day?

2) Will it be safe to visit a Muslim country?

The prevalent perception of certain cultural practices in the world gives birth to such myths. But it is certainly not valid otherwise, what is the reason that places like Dubai, Israel, etc. are so popular among tourists.

The tourist women, whether alone or with family, have no restriction to wear any hijab or burqa. However, there are places like mosques, where you will need to wear a decent and simple outfit. A knee-length top and simple jeans and an abaya (just in a mosque) follow the culture.

The local women wear traditional clothes majorly, but they are also not restricted to stay at home. They go out and visit the markets because society is not as suffocated as it was a few years back. BREAK THIS MYTH, OPEN THE WINDOWS OF YOUR MIND AND LET YOUR THOUGHTS BREATHE POSITIVITY. 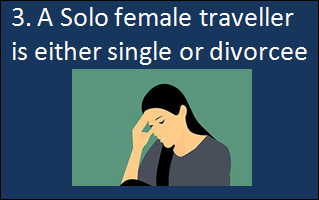 The myth is nothing but just a reciprocation of some minds that think only bad about females. For centuries it has been considered that a woman or girl should always take someone with her while going out. But the females nowadays break these myths and measure the new corners of the world without any companion.

The height of ignorance is that some people think only frustrated women prefer to travel alone and have no respect for relationships. They are not reliable and also have a bad character. It sounds so rubbish, and yes it is big rubbish.The myth is nothing but just a reciprocion of some minds that think only bad about females. For centuries it has been considered that a woman or girl should always take someone with her while going out. But the females nowadays break these myths and measure the new corners of the world without any companion.

The modern era, women and girls are free-spirited. They are self-reliant and have their own identity. Even if they are in a relationship and have children, their efforts are to keep their individuality. Females today need their ‘me time,’ As a solo traveller, you should not worry about such stupid myths.

The above myths draw the picture of the foolish things that happen around you in the name of myths about the females. Solo travelling is never a negative experience; it is the best opportunity of life to go through enhancing self-realization. If you have not planned your first solo trip because of the above baseless myths, please open your eyes, pack your backpack, and go for a tour.

Follow the necessary precautions of safety, health, and nothing can ever harm you. Do not worry about the money thing; there are many cheaper options to borrow funds. In short, for your first ever solo trip, pack your bags and book American Airlines flight ticket online and save up to 40% on every booking.