It is a Spanish Airline based at Gran Canaria Airport. The airline is a regional air carrier that offers inter-island services in the Canary Islands and other Atlantic Islands. There are various affiliated airlines that operate on behalf of Binter and provide services to Morocco, Portugal, and Western Sahara. It offers its services from its hubs that are two in number. https://www.bintercanarias.com/

Founded in the year 1989, the airline is into the industry for the last 39 years and is providing passenger carrier services since then. With a fleet size of 23 aircraft, the airline serves almost 20 destinations including both domestic and international places. It also has an official website that contains all the major information regarding the airline - www.bintercanarias.com. The headquarters are situated in Gran Canaria and Spain.

The airline was formed as a subsidiary company of Iberia. The operations by the airline began as one of the regional airlines and currently it is the only airline that serves all the eight airports of the Canarias. Africa is also served by the airline and also operates scheduled flights to Marrakech, Dakar, Vido, Cape Verde. Some planes were transferred from Binter to NAYSA so that the costs will be reduced and there will be an increase in the benefits.

The operations were started by the airline as a regional airline of the country to provide carrier services to various passengers daily. It aimed at operating the highest possible number of flights between the islands so that there is no lag in the services offered. To date, Binter is the only airline that connects all the major 8 islands in the region with each other. Some other destinations are also served which includes Madeira, Portugal and there are 4 destinations in Morocco.

According to a recent report of the year 2019, the destinations served by the airline include Cape Verde, Portugal, Spain, Morocco, etc. Various airports are served in these destinations. It has two main hubs from where the operations are carried out. They are namely Gran Canaria Airport and Tenerife North Airport. The airline serves various connections and it has many routes where services are provided by the airline.

It operates as a regional airline of Canaria and it is known for a specialty that connects all the islands in Canaria itself. The airline is believed to be the only one who serves all eight airports present in Canaria. Since its foundation, it has always focussed on increasing its fleet and destinations served. Great quality services to its customers is always a priority that is fulfilled by the airline. Technical services availed by the airline is provided by Binder Technic since 2008.

There is a restriction on carrying baggage while travelling through Binter Air. The maximum limit should be taken care of since carrying extra luggage may cost you extra, more than you would have imagined. it is recommended to carry baggage within the prescribed limit. Checked-in baggage carried by each passenger should have a maximum weight of 23 kgs. The appropriate weight that can be carried should be between 20-23 kgs. One cabin baggage is also allowed that can be carried along and should weigh 6 kgs only.

Passengers will have to pay extra to avail meals in flight, however, beverages and little snacks are served to all its guests. Complementary services are offered to long-haul flights generally. You can also make your meal requests at the time of booking tickets. Pre-order of meals is recommended so that the attendants can have the necessary arrangements beforehand.

The official website of the airline offers easy booking of tickets if you are planning to travel through Binter Airline. Social instructions can also be mentioned while booking so that you don't have to go back and forth if you need anything. Easy cancellations of tickets can also be done in case of emergencies. The company also offers discounts to its customers so that sometimes they can book cheap flights too.

Major cabins are offered to its guests namely Business-class and economy class.

Business-class - Leisure travel experience is provided to its passengers with free meals and beverages options. Entertainment facilities are also available to restrain passengers from getting bored. Good choice of food is available for the guests to enjoy the authentic taste of the food prepared by great chefs.

Economy class - Comfortable seats available providing good travel experience. Decent space is available in between the seats. Meals are offered depending on the duration of the flight. There is no major difference between the two classes, however, travel in the economy is cheaper than that of the business-class.

Visit Binter Canarias site for web check-in http://www.binternet.com/ and navigate to manage to bookings. You may have the option of online Binter Canarias Web check-in and boarding pass if still, you are facing any problem please call +34 902 391 392. 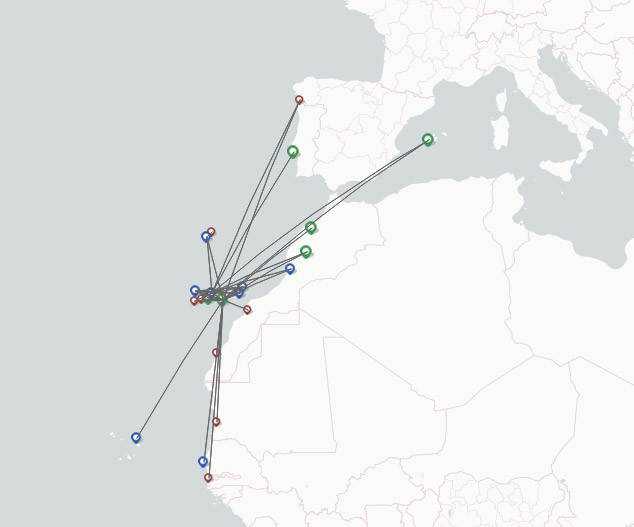