Bangkok Airways is a regional airline of Thailand, Bangkok. The airline offers scheduled services to various destinations including Thailand, Cambodia, China, etc. Suvarnabhumi Airport is known as its main base. The headquarters are situated at Jom Phol Subdistrict, Thailand, Bangkok. You can also visit its official website to know more about the airline, its operations, destinations etc. Website - www.bangkokair.com.

Established in the year 1968, the airline is operating since the last 51 years and is committed to providing quality services to all its passengers. It was named as Sahakol Air back then after its establishment. Apart from its main hub, it has two more secondary hubs as well which are the Phuket International Airport and the Chiang Mai International Airport. With the fleet size of 40 aircraft, almost 28 destinations are served by the airline combining both domestic and international ones. The airline operates as one of the best airlines in the region and also has a slogan that goes well with its services. The slogan is "Asia's Boutique Airline".

Being established in the year 1968, it was named as Sahakol Air and used to provide air-taxi services back then. The company to provide scheduled services in the year 1986 and became Thailand's first privately-owned airline. In the year 1989, it rebranded itself and then became Bangkok Air. The airline planned to buy wide-body aircraft as it aimed to expand its fleet. It wanted to order its first wide-body aircraft so that it can easily serve long distances that took log hours of travel. It also owns a subsidiary airline fully which is known as Siem Reap Airways.

The first major routes served by the airline was Bangkok-Nakhon Ratchasima,

Bangkok-Krabi, Bangkok-Surin. The first owned by the company was built in the year 1989 and it was also established in a tourist international destination. The airline expanded its fleet in 1992 when it introduced 107- seater Fokker 100 aircraft to its fleet. In 2007, the company proudly bagged Garuda Emblem, which is a royal warrant bestowed to the companies that serve the nation exceptionally with its great services.

It currently owns a fleet size of 40 aircraft with the help of which various destinations are served by the airline. Both domestic and international ones are served by it that can be segregated as 12 domestic destinations and 18 international ones. Operating from its headquarters in Thailand it serves many destinations including Cambodia, China, India, Malaysia, Myanmar, Singapore, Vietnam, etc. Further various cuties are served in these countries and it carries several passengers on long-haul routes as wide aircraft is operated in such routes.

The airline became the first company which was privately owned in the region and which provided scheduled services to the passengers. Operating since the last 51 years it first was named as Sahakol Air and later its brand name was changed to Bangkok Air. The airlines operate aircraft on a large scale and it has employed many employees to make sure that its customers can have the best travel experience after travelling through their airline. Three airports are owned by the airline namely - Samui Airport, Sukhothai Airport, Trat Airport.

No matter how long your flight is with Bangkok Airways, you can always enjoy complimentary meals with this airline. They also have a special meal option available for their passengers. Economy class passengers can also access some of their lounges across Thailand airports and you will have to ask at the airport for full details. Thai menu with some signature dishes are available and you can order from their in-flight menu. Juices, milkshakes and other beverages are also available.

Easy flight tickets available to travel to and from Bangkok. Their official website has a separate section from where the passengers can conveniently book tickets. You can also manage and make any modifications to your booked tickets with the airline. Easy cancellation options are also available in case of an emergency. Travel date, destination and preferred times are some of the basic information needed.

Business-class - Comfortable seats with lots of spaces in between and many entertainment facilities available. Hot meals with snacks and beverages are also served on long-haul flights. Experience leisure travel.

Visit Bangkok Airways site for web check-in http://www.bangkokair.com/ and navigate to manage to bookings. You may have the option of online Bangkok Airways Web check-in and boarding pass if still, you are facing any problem please call +66 (2) 270 6699. 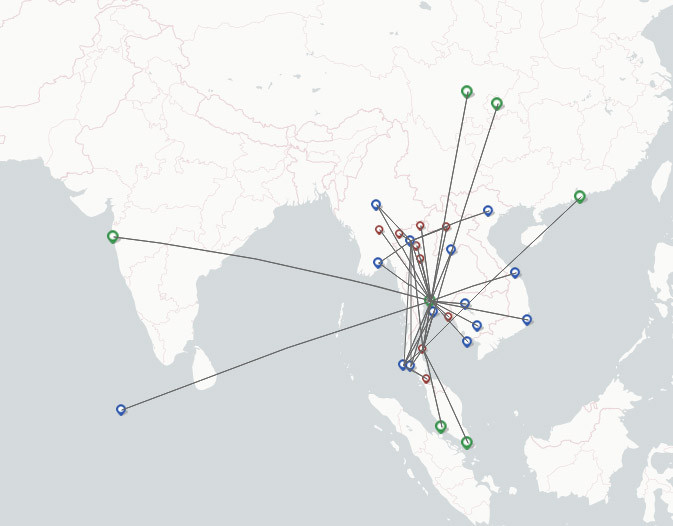