If at the moment you are looking for a trustworthy flight service AlMasria Universal Airlines is the one to choose. This the one of the best airlines of Egypt. You can book flights from http://www.almasriaairlines.com which is the authentic site for the best deals and discounts.

AlMasria Universal Airlines is a private Egyptian airline based entirely in Egypt. It is also known as just AlMasria Airlines. It was first established in 2008. AlMasria gets its name from the Arabian word for Egyptian. This airline works very efficiently and operates scheduled and charter airline services from Egypt. AlMasria is the first privately owned and lost cost airline of Egypt. It works all day and every day.

The first plans for AlMasria were declared in 2008 and the airline started it’s operations in June 2018. The first president and CEO of the company were Hassan Aziz. In an interview in April 2009, he stated that the airline would start working in 2009 to take advantage of the low prices during the global financial crisis to increase the demand for air travel in the most popular Arab countries.

The company also offers an efficient and effective cargo service in the belly hold of its passenger flights.

The maintenance of this airline is completely taken care of by the EgyptAir under a total service agreement. The EgyptAir also trains the AlMasria flight crew and the technical team. EgyptAir also takes care of their ground handling, the passenger services which are looked after by the Egypt Aviation Services, and the catering is undertaken by a new venture between EgyptAir and Lufthansa’s LSG Sky Chefs.

The AlMasria Airline consists of Airbuses such two A320-200, one A321-200, one A330-200. It also consists of one Boeing 737-500. The Airbus A320 holds in place the fleet of the airline. The first A320 reached Egypt in April 2009. And the second arrived 4 months later on August 2009. These aircraft have been leased from BOC Aviation. This airline provides an amazing full on-board service.

The AlMasria Airline flies to various international and domestic destinations on a very regular basis. Even internationally, they can fly you to various cities and countries from the kingdom of Saudi Arabia to Europe to Italy. They have domestic flights from Hurghada to Sharm El Sheikh. Their offices and agent network cover every destination and make it easier for people to fly.

As of May 2017, the airline is operating international scheduled flights in Egypt, Italy, Kuwait, and Saudi Arabia. AlMasria Airlines became the first airline to operate flights to Saudi Arabia's Yanbu Airport in December 2009. And in June 2010, the airline repeated the same milestone by operating flights to Qassim Regional Airport. The Yanbu and the Qassim airports were previously both domestic airports. Both flights for these airports stem from Cairo International Airport.

This young airline has major plans for its future. It plans to increase the number of its destinations which in turn will enhance its existence in the Gulf states, Europe and North Africa. AlMasria Airlines has a motto that says “value for services". This airline offers cheap flight tickets at affordable prices. This affordable price increases competition between various airlines. These prices also secure a greater share in the aviation and travel market.

AlMasria Airlines provide a lot of privileges when booking a flight. It has an online booking which makes it easier for the passengers to book and cancel flights from anywhere in the world and at any time. They are open throughout the year all day and every day. This, in turn, provides an amazing service to its customers. The passengers can get the facility of booking their preferred seats while booking a ticket online. They are allowed to check-in online and are capable of printing their boarding passes just two hours before the departure. And then the passengers' can check-in at the airport counters of AlMasria Universal Airlines.

The carry-on baggage facility in AlMasria Airline is amazing and efficient. The free permitted baggage allowance of each passenger is determined according to the passenger class booked.

And if in case the weight of the free baggage allowance exceeds, an extra charge is added per kilogram which you need to pay before boarding.

The Airlines provides its passengers or users with a wide range of food to choose from. They give these food and beverages for free but they are given based on the journey and class. It varies from one class to another.

AlMasria Universal Airlines food: It depends on your class of ticket.

AlMasria Universal Airlines beverage: You can either buy it from the bar or avail free beverages which also depends on your type of ticket.

AlMasria Universal Airlines special order: Special orders and requests have to be made 48 hours before the departure.

The AlMasria Airline flights can be booked from anywhere and everywhere. You can either choose to book it online or from any ticker counter which are open throughout the year.

The AlMasria Airline provides a state of the art business class section. Doesn’t matter where you are traveling to, AlMasria enables you to enjoy a more relaxing journey in its business class.

The AlMasria Business Class: Provides you with amazing lounge access, priority boarding at the airport, an increased free baggage allowance, and delicious in-flight meals for your journey to be more enjoyable. 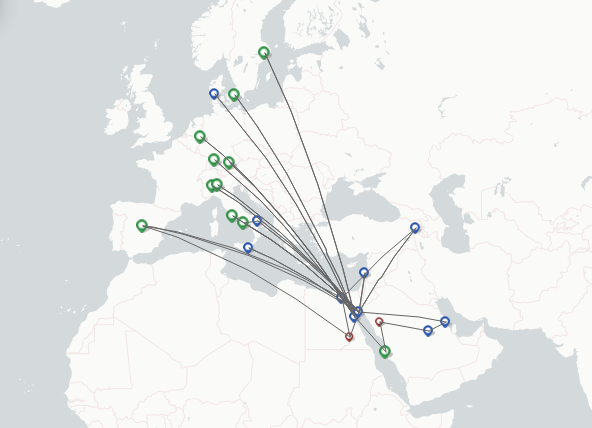 Yes. The passengers can take the pets provided there is a proper vaccination and health certificate.

2. What is the requirement to travel with baby in AlMasria Universal Airlines?

The staff will assts the mothers and they can get help while feeding. Strollers will be available  on request. The Children between the age 6- 11 can travel without their parents if they fulfil certain formalities.

3. Can I be denied boarding if my name or title on the booking does not match the details on my photo identity card in AlMasria Universal Airlines?

Yes. Tickets and the ID proofs will be checked at the entry gate and the details and the titles on both need to be same. If they are not the same the passenger will not be allowed to take the flight. Request can be made to the airlines authorities.

4. What is required to enter the airport terminal and check-in at the counter in AlMasria Universal Airlines?

While entering the terminal the authorities will check the valid tickets and passport without which the passenger will not be allowed to enter the terminal. After entering again, the tickets will be checked, and the baggage will be checked. You can also find more information about check-in on AlMasria Universal Airlines website - http://www.almasriaairlines.com/

5. What is allowed in cabin baggage AlMasria?

Per head 7 Kg of luggage will be allowed for free and anything more than that will be charged extra. The passengers can carry small sized handbags, laptop, umbrella etc. inside the cargo.

6. Can we carry food and alcohol is allowed in AlMasria?

Yes. The passengers are permitted to carry their own food in the flight but no liquids r any sticky thing is allowed. There will also be a menu that one can get in the flight. No alcohol will be allowed while you fly.

7. How can I pre book extra baggage and its charges AlMasria Universal Airlines?

There are certain limits for the baggage to be carried and if your baggage is more than that then there are extra charged to be paid to the airlines, these can be paid in advance online or on airport Counter pay them at the time of departure at the counter.

8. How can I get discounted coupons AlMasria Universal Airlines?

If you wish to make use of the discount coupons, then you need to see the official website ( http://www.almasriaairlines.com/ ) of the airlines where you will be able to see the coupons and its details lie validity and all. You will get all updated information therein.

There are many entertainment facilities provided however this airlines do not have WIFI facility onboard.

10. Does AlMasria provide food? veg /non veg. And can I carry my own snack onboard to eat?

Yes. There will be a huge variety of doo items and you can take the food and beverages of your choice. The food  will be freshly made by the expert chefs. You can also get our own food that is not sticky or smell at all.

11. How I can make reservation with direct AlMasria Universal Airlines?

You need to first enter the website of the airlines and then see the AlMasria Universal Airlines flights schedule. You need to enter the correct details like date, destination and time. Then you need to see how many of the tickets are available and then book the tickets. You need to make online payment for confirmation of tickets.

12. How can do date change in AlMasria Universal Airlines flight?

You must enter the correct details about the destination,  time and date. If you think that your details are not right and if you wish to change the date, then  you need to fist talk to the airlines authorities. You need to write a mail to them and then they will do the needful subject to availability.

13. What is direct phone number of AlMasria airlines customer care?

There is a direct number f the airlines and the passengers can call on this number in case of any quarries 20 2 25750343.

14. What onboard services will AlMasria Universal Airlines?

There will be a variety of onboard services provided by the airlines. In addition to the good food and beverages, also there will be some entertainment facilities that one can enjoy.

15. Will AlMasria Universal Airlines have air conditioned buses to take people to the aircraft?

Yes, there will be air conditioned buses so as the passengers can reach to the airport quickly. These buses provide lots of space as well as comfort.

16. Can I interline my AlMasria flight with other domestic and/or international airlines?

No. You will not be permitted to interlink any flights and you need to make the separate bookings at AlMasria Universal Airlines.

17. How to book tickets for AlMasria Universal Airlines?