Air Arabia, one of the biggest Emirati airlines, is considered a low cost airline, with its headquarters in the A1 Building Sharjah Freight Center, Sharjah International Airport. A large and expansive airline offering passage to many countries and continents, Air Arabia has more than 150 destinations spread all over the Middle East, Asia, North Africa and Europe. A member of the Arab Air Carriers Organization, Air Arabia offers some of the most comfortable and luxurious flights, along with cheap prices few other airlines can compare to. The airline has several different hubs, with some of the most important at Borg El Arab Airport, Mohamed V International Airport and Sharjah International Airport. Check out all the deals and sales at www.airarabia.com.

Air Arabia is pretty famous all over Europe as the expansive size of this airline makes it one of the very biggest to be operating out of the Emirates, a fleet size of 54 and a destination list numbering no less than 151 being just a few of the impressive features of the airline. The airline has its headquarters in the Sharjah International Airport, Sharjah, and is an important member of the Arab Air Carriers Organization.

Air Arabia was established on 3rd February, 2003 by a decree issued by the Sultan bin Muhammad Al-Qasimi, becoming the first low-fare airline to be operating in the Middle East. The airline started operations on 28th october, 2003, with a flight that went from Sharjah to Bahrain International Airport, and surprisingly was profitable from its very first year of operations. Air Arabia is the airline owning the 6000th A320 family aircraft.

Air Arabia is one of the most important Emirati airlines out there, as it has provided low cost, efficient and comfortable air-passage services to different continents for 15 years. Having hubs in Borg El Arab Airport, Mohamed V International Airport and Sharjah International Airport, the airline is known for providing very comfortable flights with the best customer service, made possible by talented crews and flight members.

Air Arabia services a quite wide range of airports and cities located across different continents, with the latest addition to their destination list being the city of Cairo. With more than 115 airports across the Middle East, North Africa, destinations across Asia and Europe being on their list, it is no surprise thousands of people fly with Air Arabia tickets every single day.

Air Arabia’s fleet consists mainly of Airbus vehicles, with Airbus A320-200s and Airbus A321LR taking the lead as the most important and common planes in their fleet. Following an inspection in July 2019, they have a total of 52 A320-200s and 2 A321LRs, making a collective fleet of 54 aeroplanes.

Air Arabia specializes in being one of the most affordable Airlines in the entirety of the Middle East, as this low fare airline has managed to both reduce the cost of their tickets as much as possible while still remaining a profitable company from the first year, which is not easy to do. Being one of the largest airlines in the Middle East, it is able to provide ferry services to a host of different continents, and thus provides its low cost services to lots of different countries.

While Economy class has a weight limit of 10 kilograms, Business has it lifted to 14, with both classes being allowed only a single piece of luggage. The size limit of the baggage says it must be less than 55cm*35cm*25cm. Air Arabia requests that all passengers stay within the aforementioned limits, as passengers with extra luggage will not be allowed on/ will be fined heavily.

While meals are not included with the tickets for most Air Arabia flights, you have the option of purchasing a wide range of different types of meals, appetizers and drinks from the plane by purchasing them with cash.

Air Arabia Food- You can buy lots of different meals and main courses on the plane itself by buying them with money.

Air Arabia Beverages- Just like with food, Air Arabia doesn’t offer complimentary drinks, but you have the option of purchasing many different beverages and drinks.

Air Arabia Special Meals- You can get special meals for special diets, religious restrictions or other circumstances by mentioning it well before the date of the flight.

Air Arabia, being one of the largest and most affordable airlines in the Middle East, of course has lots of booking options you can use to purchase tickets for yourself, loved ones or friends. Besides the standard booking portals such as travel agencies, you also have the excellent option of visiting their own website, www.airarabia.com for the latest deals, discounts and ticket booking.

Business class- The advanced ticket, Business class has any and all luxuries you could require, with all limits like weight, luggage size and others being increased.

If you are looking to make Air Arabia reservations visit our website airlinesmap.com or can book with direct Air Arabia official website https://www.airarabia.com You may call our toll free number 888-220-0490 or direct Air Arabia number +971 6 558 0000. Get more information about Air Arabia Reservations and Flights Tickets to click below.

Visit Air Arabia site for web check-in https://www.airarabia.com and navigate to manage to bookings. You may have the option of online Air Arabia Web check-in and boarding pass if still, you are facing any problem please call +971 6 558 0000.

It's very easy to claim Air Arabia cancellation and Air Arabia refund call direct phone number of +971 6 558 0000 or visit official site https://www.airarabia.com manage bookings. You may have the option to refund or cancellation. 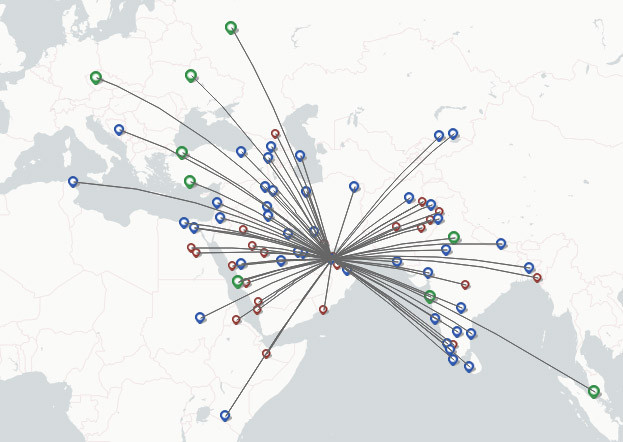 1. what is the checking procedure at the counters for Air Arabia?

2. Can I be denied boarding if my name or title on the booking does not match the details on my photo identity card?

Yes. If your name or title does not match the details on your issued photo identity card then your boarding will surely be denied. No airline will allow a person without proper identification to travel from one country to another. That is a risk too big to take and no airline will take it.

3. What is required to enter the airport terminal and the check-in at the counter?

It is compulsory to carry your passport which has been issued and verified by the government along with your boarding pass and your luggage when you are travelling by air. The boarding pass will then be verified both by the airport security and the airline security. And if, in case, you are travelling with an infant, you are required to carry the infant’s birth certificate for his/her identification.

4. What is allowed in cabin baggage Air Arabia?

Air Arabia gives all their passengers a generous cabin baggage allowance of 10kilos which should be within the dimensions of 55×40×20cm irrespective of the class booked.

5. Can we carry food and alcohol in Air Arabia flights?

Air Arabia does not allow their passengers to carry any kind of alcoholic drinks or any liquid substance on-board. They have a strict no-drinking law that everyone needs to abide by. You can neither carry any kind of food on-board other than baby or medicinal food or anything similar.

6. How can I pre-book Air Arabia extra baggage and its charges?

You can pre-book Air Arabia extra baggage and its charges using their official website ( www.airarabia.com ). They charge a very generous and minimal fee per extra kilogram.

7. How can I get discounted coupons on Air Arabia flights?

8. Does Air Arabia have Wi-Fi?

Yes. Air Arabia has Wi-Fi. They believe in hospitality and so they make sure their passengers are connected with the rest of the world on-board after take off.

9. Does Air Arabia provide food? Vegetarian/Non-Vegetarian. And can I carry my own snack on-board to eat?

Air Arabia provides a very large selection of both vegetarian and non-vegetarian food for you too choose from. They provide their passengers with top-notch food. But they do not let you carry your own snack on-board.

10. How can I make reservations with direct Air Arabia Airlines?

You can book flight tickets with Air Arabia Airlines directly from their official website or the other ticket booking websites that are available.

11. How can we do date change in Air Arabia Airlines flights?

It is very simple as the date and your destination of your respective Air Arabia flight can be changed using their official website. On the official website you will find a section why you can change or alter your flight date or time according to your wish. The ticket will be available as soon as you make the change.

12. What is the direct phone number for Air Arabia Airlines customer care?

Air Arabia has different phone numbers for each different countries and states. All you have to do is visit their website which has all the phone numbers and you can get the one you are looking for. You can find direct number of Air Arabia here https://www.airarabia.com/en/call-centre.

Air Arabia provides tons of amazing on-board services on their flights to make sure their passengers have a great time on-board. They provide services such as on-board magazines, on-board mall, on-board cafe, Wi-Fi, etc.

14. Will Air Arabia have air conditioned buses to take people to the aircraft?

15. Can I interline my Air Arabia flights with other domestic and or/international airlines?

Air Arabia also allows you to interline your flight with other domestic/international airlines given that the interlining should be with the airlines Air Arabia has alliances or codeshare agreements with.

16. How to book tickets for Air Arabia Airlines?

17. What happens if my luggage gets damaged on the way?

The airline is known to be one of the best airlines when it comes to the transportation and care of the passenger languages. If your luggage gets lost or damaged on the way the airline promises to provide $20 per kg baggage to a maximum of 20 kg a person.