Founded in 1950, Aerolineas Argentinas is the leading airline in South America and has been a member of the SkyTeam global alliance since 2012.

Aerolineas Argentinas relaunched its loyalty program, Aerolineas Plus. It includes 3 levels: Classic, Gold and Platinum, and offers excellent benefits to its members. Passangers can enjoy a wide network of destinations, by accumulating and redeeming their miles to fly not only with Aerolineas Argentinas, but also with its associated companies.

The history of Aerolineas Argentinas dates back to 1929, with the formation of Aeroposta Argentina, one of the first commercial aviation ventures in the region. The Argentine Government, recognizing the vast breadth of the country's geography and the need for rapid means of communication between the interior and large cities, established an airline to transport passengers and mail. The first two destinations served by Aeroposta were Mendoza and Posadasand among its first pilots were the French Jean Mermoz and Antoine de Saint-Exupery.

The work deals with the company Aerolineas Argentinas and Austral. Company proposing to analyze its historical evolution and its present according to the theory of public policy management. Behind the management of this state-owned company, technical aspects are not exclusively hidden, but also a complex network of interests and actors in the conflict, while the said company is affected by the socio-economic and political situation of the country and the world in which insert.

Through this work they will try to unveil this complex framework, permanently relating the management of Aerolineas Argentinas and Austral with the role played by the different actors, factors, and issues on the National Flag Line.

Aerolineas Argentinas will transfer 38 daily frequencies from Aeroparque to Ezeiza. It is part of the process of deregionalization of the metropolitan airport, which implies that from the city of Buenos Aires only cabotage flights or Uruguay will depart. The company will thus strengthen its international operations, enhancing connections between cities in the interior and neighboring countries with transatlantic destinations. The destinations that will be transferred to Ezeiza and that are currently operating from Aeroparque are 9.

With these operations, Aerolineas will add 56 average daily flights from the international airport. According to resolution, all international flights except services to and from Uruguay must be diverted to Ezeiza to decongest the Jorge Newbery Airpark and be able to provide a better quality service in both airports.

Aerolineas Argentinas is in an excellent moment with very good news for travelers who choose their flights. Those who seek to fly in high-quality aircraft with very good service, Airlines received a high honor this year. About this award, the president of the airline, Luis Malvido, thanked the recognition on behalf of its 12 thousand employees.

2019 has also been an excellent year in sales for Aerolineas Argentinas, with historical records in several months. In March, for example, it sold more than 867 thousand flights to passengers who were able to enjoy their holidays in Argentina. For example, flights to Ushuaia increased 30%, with 40 weekly flight frequencies between Aeroparque and the city of Tierra del Fuego. Malvido also announced the creation of an Air Bridge between Buenos Aires and Córdoba. According to the official, this bridge of Aerolineas Argentinas will allow traveling between both cities to go up to the first plane that passes. Given the growing importance of Córdoba as an airline hub, this will allow improving air connections throughout the country.

The Baggage Allowance includes everything that the passenger is authorized to transport without charge according to the fare purchased. It includes what you dispatch as checked baggage in the hold and what you carry with you in the cabin, as hand luggage. It should be borne in mind that there are promotional rates that do not include baggage allowance in these cases having the option to buy additional luggage in advance through the website, branch or contact center up to 3 hours before the flight departure with a fee preference.

This depends on the duration of the flight. In those of less than an hour, they give nothing if you want the water you have. Now if it is more than an hour pass with drinks, which can include hot, as in this case a tea. Now if you have more than two hours or specific cases such as Mendoza you can have in addition to drinks a bag of Natural Break with nuts and a Cereal Mix bar, which in winter would be a major. And in cases like Ushuaia, they would offer it twice (during the flight), but only with the products, the other with drinks.

Aerolineas Argentinas offer you the facility to know online all the changes that are made in your reservation and keep you informed until the last moment before boarding your flight and taking off. If you do not see any of your flights, contact the Call Center in Argentina 0810-222-86527 (FLY).

Aerolineas Argentinas will be implemented progressively, starting with the Bogota and Punta Cana destinations. There are six classes, from economic to business.

This model is defined in tariff families: 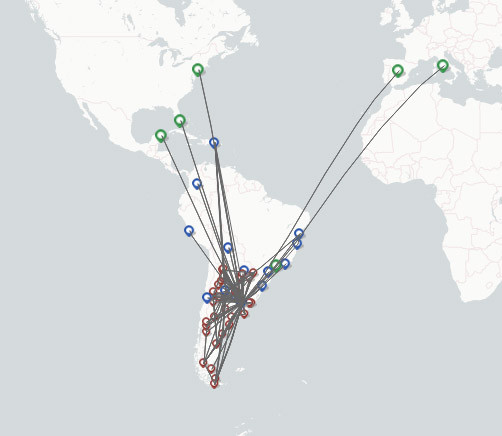